Fashion and beauty magazines are tremendously successful, as are television ad campaigns where women who are 5'10" and weigh 120 lbs. model jeans. Clearly, most women do not look like that and never will, so why do they buy magazines and clothes that remind them of it?

While critics insist that Americans, the fattest people on the planet, are under too much pressure to be thin, the truth is instead that they like role models, no differently than how some parents will buy a particular magazine if it has a female scientist on the cover.

Models on magazine covers do not taunt imperfect women, they provide "thinspiration", according to a paper in Health Communication which involved 51 female college students who participated online in what they were told was research in which they would evaluate magazine articles and advertisements. 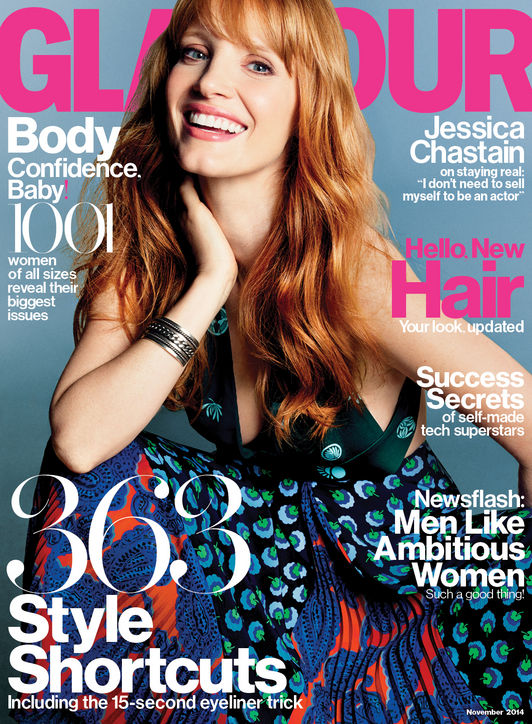 If you buy this magazine, you will not be able to look or act like Jessica Chastain, so why torture yourself? A new paper says it is not angst, it is motivation. Credit: Tom Munro/Glamour

The participants viewed the ads and articles over the course of five days, in order to give a more realistic portrayal of how people consume media. At the beginning of the study, Silvia Knobloch-Westerwick, author of the study and professor of communication at The Ohio State University, collected data on the participants' magazine reading habits, their body mass index, body satisfaction levels and their tendency to compare their physical appearance to that of others.

On each of the five days, the women viewed 16 pages containing advertisements or articles taken from top women's beauty and fashion magazines. The pages were not chosen for content, but because each contained a photo of a thin female model as the dominant graphic element on each page.

Crucial to the study were questions aimed at discovering how the women were comparing themselves to the models on the magazine pages.

Were the participants simply evaluating how they looked compared to the models? Those who were making such comparisons would say they strongly agreed with statements like "This woman is thinner than me."

Or were the participants viewing the models in a self-improvement type of comparison? These women would strongly agree with statements like "I would like my body to look like this woman's body."

After the five days, participants completed more questionnaires, including one that asked them about their dieting behavior during the course of the study.

Results showed that women who simply evaluated themselves compared to the models showed lower body satisfaction by the end of the study. They were also more likely to say they dieted during the last five days.

"Social comparison for self-evaluation makes these women less happy with how they look and more likely to want to diet," Knobloch-Westerwick said. "They look at the models in the magazines and think, 'this person is so much thinner than I am; I should skip a meal.'"

But women who used the self-improvement social comparison ("I would like my body to look like this woman's body") actually saw increases in body satisfaction.

"These women felt better about their own bodies because they imagined that they could look just like the models they saw in the magazines," she said.

Although this wasn't examined directly in the study, Knobloch-Westerwick said she suspects that the text accompanying these images – lines such as "Lose 10 pounds in 5 days" – would feed into those fantasies.

Another key finding was that women in the study tended to shift toward the self-improvement comparisons over the course of the study. That suggests that women may begin to identify more with these thin models after repeated exposures.

"They may begin to feel affiliated with the models, and start to think this person is someone like me, someone I can be friends with and emulate," she said.

Knobloch-Westerwick said this may also explain why the study found that viewing images of thin models may lead to higher body satisfaction, when so many other studies have found the opposite.

"If they just see an image of a thin model once and have to react immediately, they may indeed have poorer body satisfaction," she said.

"But if they look at images over the course of several days, readers may begin to feel more affiliated with the models, feel more like they could be like them. That could lead them to switch from comparing themselves negatively to the models to using these models as thinspiration."

In addition, she noted that many studies that found viewing images of thin models leads to poorer body satisfaction utilized just images without any accompanying text. But because this study included actual magazine pages, participants read positive messages about how they could look like the models pictured.

Knobloch-Westerwick said women, at a surface level, may read these magazines simply as entertainment. But they should realize how the magazines are affecting them.

"Women might be able to fight off the harmful media impacts on their body satisfaction if they understand how these messages are designed to make them fall for unrealistic and even unhealthy body ideals."