It's Not Religious People Who See Conflict Between Science And Religion, It's This Group
By News Staff | October 22nd 2015 09:31 AM | Print | E-mail

Instead of religious people thinking science and religion are in conflict, it is the 73 percent of people who never attend church who think they must be in conflict - because religious people must hate science. If that baffles you, the strange science beliefs of other countries (herbal medicine in Asia, banning everything in Europe) make more sense, because Americans have the highest adult science literacy in the world. 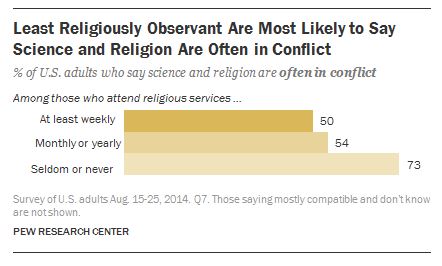 According to the Pew Research Center survey:


·         76% of respondents who have no religious affiliation think science and religion, in general, are often in conflict. But when it comes to personal beliefs, just 16% of the religiously unaffiliated say their religious beliefs conflict with science.

·         40% of white evangelical Protestants say their personal beliefs sometimes conflict with science, while a 57% majority say they do not.

·         The share of all adults who perceive a conflict between science and their own religious beliefs has declined in recent years from 36% in 2009 to 30% in 2014. The change occurred only among those who are affiliated with a religion; among this group, the share who say science sometimes conflicts with their personal beliefs is 34%, down 7-percentage points from 41% in 2009.

·         Among the three-in-ten adults who say their own religious beliefs conflict with science, the most commonly mentioned source of conflict was beliefs about the creation of the universe and evolution.