News Staff
In the two decades existence of lab-on-a-chip (LOC), there have been lots of individual systems developed, ranging from lung-on-a-chip and heart-on-a-chip to the liver-on-a-chip and kidney-on-a-chip - but an ideal embryo-on-a-chip has eluded science because of the challenges in condensing so many life factors inside a conventional LOC.

But now two scientists have developed a PDMS (polydimethylsiloxane) "soft" process method to fabricate a transparent shell matching the shape and curvature of a real eggshell.

The most important feature of a conventional "Lab-on-a-chip" is its chemically based character, or its scaling down chemical tests into a miniature-size device.

In contrast, the newly proposed "egg-on-a-chip" is biologically based, aimed at scaling down a biological system into a miniature device. This platform contains more condensed evolutional tensors than its chemistry-based forerunners.

The biomimics system created by the two co-authors of the study significantly extended the length of the embryo culturing time. They explained in the new paper that PDMS is among the best biomaterials for many applications, and that multiple techniques could be integrated together in the new system.  PDMS likewise offers an excellent platform for in vivo fluorescent imaging studies via microscopes. 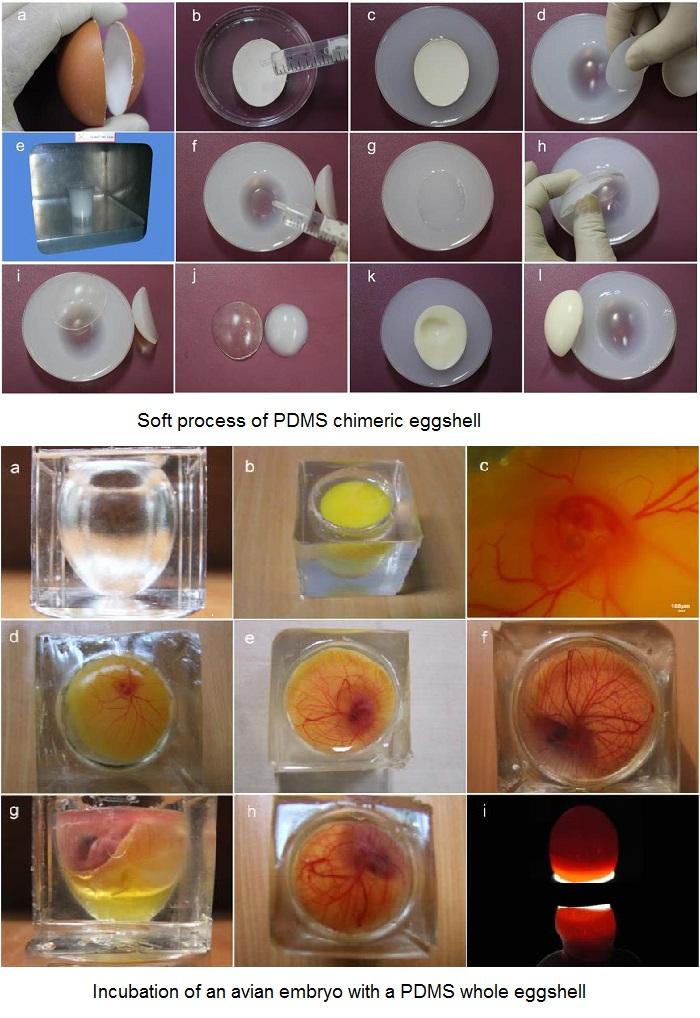 This image shows the soft process of PDMS chimeric eggshell and the incubation of an avian embryo with a PDMS whole eggshell. Credit: ©Science China Press

In experiments carried out over the course of about two years, they constructed a series of transparent PDMS whole "eggshells" to successfully culture avian embryos for up to 17.5 days; and chimeric eggshells were engineered on normal eggs.  X-stage embryos were successfully initiated in these artificial egg structures and pre-chorioallantoic membranes were observed.

Their biomimetic shells, combining high optical transparency and subtle engineering, represent a new platform to study functional embryo development. The experiments and advances led by these scientists can be replicated in other labs. PDMS, they noted in the study, has emerged as one of the best biocompatible materials over the course of decades, and has already been used clinically, which underscore the safety and wide applications of the present method.

Practical applications are likely to include the injection of blood or any body fluidic specimens into this "egg-on-a-chip" for early diagnosis. This is because an egg has the potential to function as an amplification system.

While the amount of the final sample (blood, cell or tissue) could be significantly amplified, rare variations already pre-screened by a biological system could generate more reliable results.

This is a natural, biologically based diagnostic tool that could surpass most comparable technologies currently in use. At the same time, rare gene variations cultured in an egg could replace more tedious and expensive laboratory procedures. This points to the real "practical robustness" that an "egg-on-a-chip" could offer.