In order to understand the genesis and treatment of cancer scientists are searching for links between genetic alterations and those diseases.

Historically, most of those studies have focused on the portion of the human genome that encodes protein – about 2 percent of human DNA overall. The vast majority of genomic alterations associated with cancer lie outside protein-coding genes, in what biologists call "junk DNA" and that colloquially became considered junk to the public, even though that is no more accurate than the Higgs boson being an actual God Particle. "Junk DNA" is anything useless rubbish – much of it is transcribed into RNA, for instance - but finding meaning in the sequences remains a challenge.

A team led by Lin Zhang, PhD, research associate professor in the Department of Obstetrics and Gynecology at the Perelman School of Medicine at the University of Pennsylvania, has mined those sequences to identify a non-protein-coding RNA whose expression is linked to ovarian cancer. Zhang and colleagues built a DNA copy number profile for nearly 14,000 long non-coding RNA, or lncRNAs, across 12 cancer types, including ovarian and breast cancers -- the two major BRCA-related cancers. They found that the number of copies of lncRNA genes on a chromosome consistently change in 12 different cancer types and lncRNA genes are widely expressed in cancer cells. 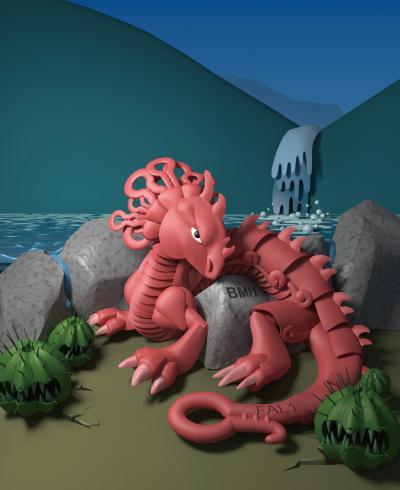 This image depicts an oncogenic lncRNA FAL1 (the dragon) dysregulating gene transcription and promoting tumorigenesis. FAL1 stabilizes BMI1 (the stone) by associating with it (the dragon twine around the stone), which subsequently enhances the activity of PRC1 (the stone pile). Constant information flow from DNA to mRNA (the water stream) is essential for normal cell growth. Inhibition of transcription (blockade of water) on tumor suppressor genes, such as p21, leads to cell transformation (growth of the cactus-like eremophytes instead of normal plants from the drought). Credit: Artwork by Lili Guo

What these non-protein-coding RNAs do is still relatively unknown. However, given their vast numbers in the human genome, researchers believe that they likely play important roles in normal human development and response to disease.

Using clinical, genetic, and gene expression data as filters to distinguish genes whose copy number alteration causes cancer from those for whom copy number changes are incidental, the team whittled down their list from 14,000 to a more manageable number, each of which they systematically tested using genetic experiments in animals.

Of the 37 lncRNAs the team fully tested, one, which they called focally amplified lncRNA on chromosome 1, or FAL1, had all the makings of an RNA oncogene. FAL1 is one of only a handful of lncRNAs to be linked to cancer to date. This knowledge is being applied for clinical applications. For example, FAL1 expression may be a biomarker of BRCA-related cancer prognosis and the basis of new anti-cancer therapeutics. As proof-of-principle of the potential efficacy, Zhang's team grew human ovarian tumors in immunocompromised mice, then injected short-interfering RNAs to block the tumors' growth using RNA interference against FAL1. The tumors in treated animals shrank over the course of the experiment, while tumors in control animals continued to grow.

"This is the first genome-wide study to use bioinformatics and clinical information to systematically identify one lncRNA, which we found to be oncogenic," Zhang says.

Finally, the team investigated what FAL1 does. They looked for proteins that associate with the FAL1 RNA and identified a protein called BMI1, a member of a gene regulatory complex called PRC1. In the absence of FAL1, the BMI1 protein is unstable. FAL1 RNA stabilizes BMI1, which in turn acts to turn down the expression of several hundred other genes. One of those downregulated genes encodes a tumor suppressor protein called p21.

These data, Zhang explains, suggest a molecular mechanism in which amplification of the FAL1 gene in ovarian cancer causes a surfeit of FAL1 RNA. That leads to enhanced stability of the BMI1 protein and downregulation of p21 and ultimately, unrestrained cell growth.

FAL1 expression may be able to serve as a biomarker of BRCA-related cancer prognosis, assuming these findings can be validated in other populations. But there also is the potential for new anti-cancer therapeutics, he says, whether those are therapeutics specifically targeting FAL1 RNA or small molecules that block the interaction between FAL1 and BMI1.