News Staff
On March 17th, 2013, an object the size of a boulder hit the lunar surface in Mare Imbrium and exploded in a flash of light nearly 10 times as bright as anything ever recorded before - the largest recorded explosion occurred on the surface of the moon.

This bright flash was recorded at coordinates 20.6°N, 336.1°E and now Lunar Reconnaissance Camera (LROC) scientists have observations before and after the impact. LROC’s first set of post-impact flash images acquired on May 21, 2013 by the Narrow Angle Camera (NAC) were targeted on the coordinates and numerous small surface disturbances (“splotches”) were detected but no new crater was found. A second set of NAC images was acquired on July 1, 2013, showing three faint ray-like features and several chains of splotches and asymmetric splotches that generally pointed to a common area west of the Marshall coordinates. A NAC pair was targeted on that convergence point for July 28, 2013; comparison of this third set of images with preexisting coverage revealed a new crater. 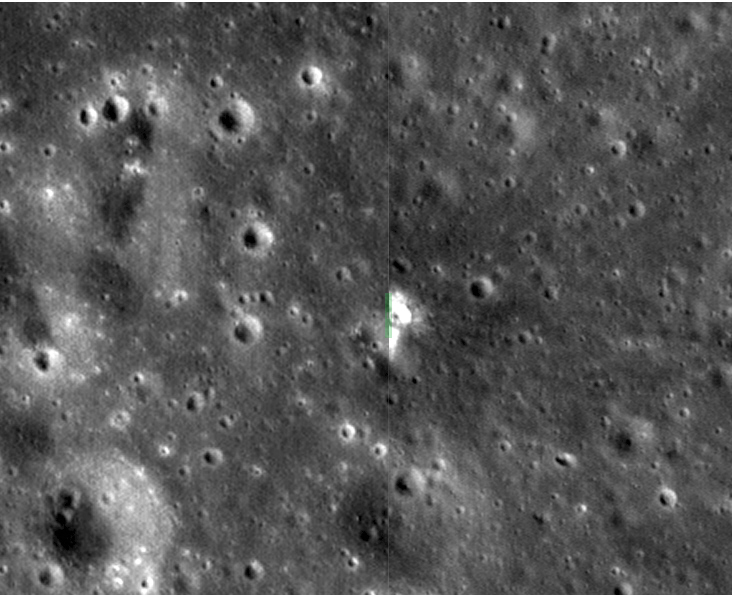 Green separates left and right before and after images. The left is from Feb. 12, 2012 and the right is from July 28, 2013. The new crater is about 59 feet wide. Credits: NASA/Goddard Space Flight Center/Arizona State University

The crater itself is small, measuring 61.7 feet in diameter, but its influence is large; debris excavated by the sudden release of energy flew for hundreds of meters. More than 200 related surficial changes up to 19 miles away were noted. Launched on June 18, 2009, LRO has acquired about 10,000 before and after image pairs.

The results are published in the January 31 edition of the journal Icarus.
News Articles
More Articles All Articles
About