In an instantaneous, 24-hour news cycle, a lot of being made of current U.S. droughts but the 1934 version was 7X larger than other comparable intensity droughts that struck North America between 1000 A.D. and 2005, and nearly 30 percent worse than the next most severe drought that struck the continent in 1580, finds a new analysis.

We may think watering lawns only twice a week is an inconvenience but by May of 1934, giant dust storms and drought covered more than 75 percent of the country and affected 27 states severely. By June of that year, Congress passed the Frazier-Lemke Farm Bankruptcy Act, which restricted the ability of banks to dispossess farmers because they couldn't grow crops. 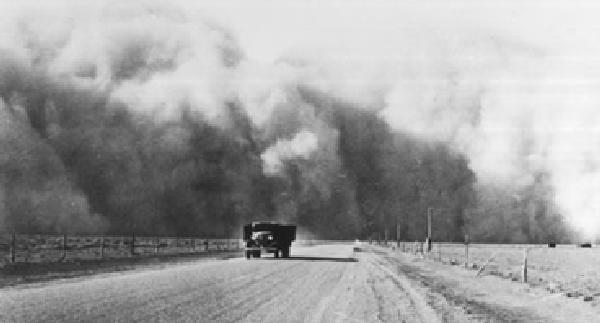 But modern droughts do have one thing in common with the more severe ones of the past. The same atmospheric pattern of a high pressure ridge over the West Coast deflecting away storms laden with rain last winter was also present over the area during the winter of 1933-34. This ridging pattern has preceded some of the worst West Coast droughts, including the 1976 California drought—the beginning of a two-year dry spell which is widely regarded as one of the most severe droughts in the state's history. The three-year drought in California might cost the state up to $2.2 billion in 2014 alone, according to one estimate.

Yet the current drought is nothing, so far, compared to what occurred in 1934, the start of a decade-spanning drought that would come to be known as the Dust Bowl and was one of the worst environmental disasters in the history of the United States.

"We noticed that 1934 really stuck out as not only the worst drought but far outside the normal range of what we see in the record," said Benjamin Cook, an environmental scientist at NASA's Goddard Institute for Space Studies and lead author of the new paper.

The drought was likely made even worse by atmospheric effects from human-created dust storms, according to the new research. The new study suggests that such interactions between the land and the atmosphere may have an important role to play in drought severity, said Cook, who holds a joint appointment at Columbia University's Lamont-Doherty Earth Observatory.

"These dust storms may have dried things out further and kicked 1934 into a really extreme event," he said.

The new study used the North American Drought Atlas, a database of drought reconstructions dating back nearly 2,000 years that are based on tree-ring studies. It also analyzed records of air- and sea-surface temperatures and precipitation to show that the 1934 drought was the worst drought since 1000 A.D.

Using climate data and dust simulations, the authors also found that dust storms, which started from a lack of rain and poor agricultural practices could have intensified the 1934 drought and spread it throughout the western United States.

A combination of changes in sea surface temperatures and a lack of rainfall in the Northwest, Southwest, and across the Southern Plains kicked off dry conditions in the fall of 1933 that by the spring of 1934 would spread to the Central Plains and Midwest. Major dust storms – the scale of which had not been seen in North America since the Middle Ages—projected dust from the Central Plains as far east as the Atlantic Ocean, according to the new study.

Some of the hardest hit areas– Midwestern states like Nebraska and Kansas—were downwind from where the dust storms originated. In these areas, dust particles accumulated in the atmosphere, reflecting incoming energy from the sun back into space. These dust-driven energy changes can disturb normal air circulation patterns, and block cloud formation and precipitation, leading to dry conditions, according to the new study.

California may be in the grips of a devastating drought, but "now we have the (Natural Resources Conservation Service), which helps to limit wind erosion and dust storm erosion," Cook said. "They can reduce the chance of a 1934 event occurring again."

The study, one of the first to examine how extreme conditions like dust storms evolve during decades-long dry periods, could help scientists better understand what causes these events and better predict them in the future, said Sigfried Schubert, a meteorologist at NASA's Global Modeling and Assimilation Office, who was not involved in the study.

"It is such an important problem for society to be able to predict these major droughts," he said.