Neural Networks: Why Human Brains Are More Susceptible To Mental Illness Than Smaller Ones
By News Staff | July 22nd 2016 09:12 AM | Print | E-mail

In humans and other mammals, the cerebral cortex is responsible for sensory, motor, and cognitive functions. Understanding the organization of the neuronal networks in the cortex should provide insights into the computations that they carry out.

A study shows that the global architecture of the cortical networks in primates (with large brains) and rodents (with small brains) is organized by common principles. Despite the overall network invariances, primate brains have much weaker long-distance connections, which could explain why large brains are more susceptible to certain mental illnesses such as schizophrenia and Alzheimer disease.

In earlier work, Zoltán Toroczkai, from the University of Notre-Dame, USA, Mária Ercsey-Ravasz, from Babes-Bolyai University, Romania and Henry Kennedy, from the University Lyon, France, and colleagues combined tracing studies in macaques, which visualize connections in the brain, with network theory to show that the cortical network structure in this primate is governed by the so-called exponential distance rule (EDR).

The EDR describes a consistent relationship between distances and connection strength. Consistent with the tracing results, the EDR predicts that there are many fewer long-range axons (nerve fibers that function as transmission lines of the nervous system) than short ones, and this can be quantified by a mathematical equation. At the level of cortical areas (such as visual cortex or auditory cortex) examined by the tracing studies, this means the closer two areas are to each other, the more connections exist between them. 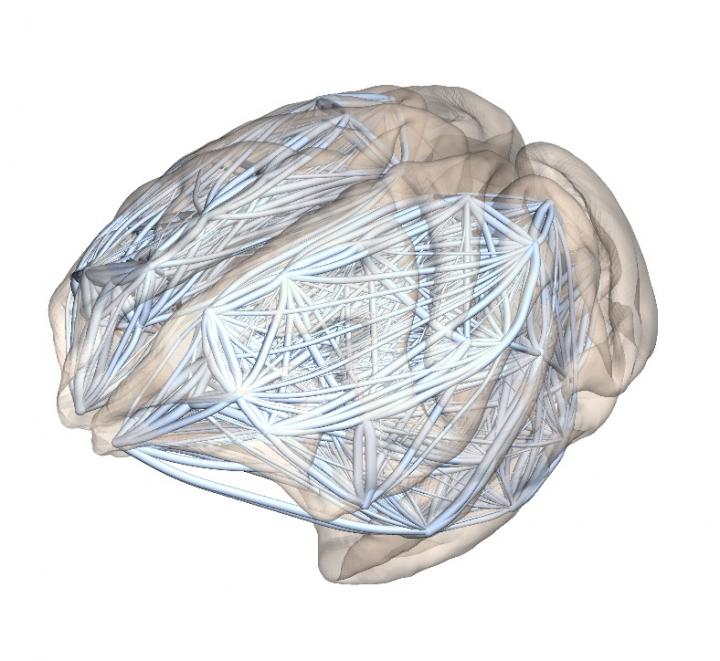 In this study, the researchers compare the features of the cortical networks in the macaque - a mammal with a large cortex - with those in the mouse, with its much smaller cortex. They used detailed tracing data to quantify connections between functional areas, and those formed the basis for the analysis. Despite the substantial differences in the cortex size between the species and other apparent differences in cortex organization, they found that the fundamental statistical features of all networks followed the EDR.

Based on these results, the researchers hypothesize that the EDR describes an effective design principle that remains constant during the evolution of mammalian brains of different sizes. They present mathematical arguments that support the universal applicability of the EDR as a governing principle of cortical connectivity, as well as further experimental support from high-resolution tracer experiments in small brain areas from macaque, mouse, and mouse lemur (a primate with a very small brain).

Their results, the researchers conclude, "suggest that the EDR plays a key role across the mammalian order to optimize the layout of the inter-areal cortical network allowing larger-brained animals to maintain communication efficiencies combined with increased neuron numbers".

As the EDR predicts and the tracing data here confirm, neuronal connections weaken exponentially with distance. Assuming the EDR can be applied to all mammalian brains, this suggests that long-distance connections could be quite weak in the human cortex, which is approximately five times larger than that of the macaque. If true, the researchers say, one could speculate that the low weight of human long-range connections may contribute to an increased susceptibility to disconnection syndromes, such as have been proposed for Alzheimer disease and schizophrenia".