News Staff
We use our hands a lot each day. Humans have highly developed fine motor skills and so we are able to perform grasping movements with variable precision and power distribution, everything from tying our shoelaces to holding a balloon.

It is ability is a fundamental characteristic of the hand of primates but is unclear how hand movements are planned in the brain. A recent research project of Stefan Schaffelhofer, Andres Agudelo-Toro and Hansjörg Scherberger from the German Primate Center has shown how different grasping movements in the brain are controlled in rhesus monkeys. Using electrophysiological measurements in those areas of the brain that are responsible for the planning and execution of hand movements, the scientists could predict a variety of hand positions through the analysis of exact neural signals.

In initial experiments, the application of decrypted grip types was transferred to a robot hand. The results of the study will be incorporated in the future development of neuroprostheses, which will be used to enable paralyzed patients the recovery of hand functions.

Researchers at the DPZ built this robothand. They analyse the brain activity of non human primates during the execution of hand grasping movements. This neuronal information, recorded with fine electrodes in the cortex, could one day be used to control a robotic hand as a prosthesis for paralyzed people. Credit: Sebastian Lehmann

"We wanted to find out how different hand movements are controlled by the brain and whether it was possible to use the activity of nerve cells to predict different grip types", says Stefan Schaffelhofer, neuroscientist in the Neurobiology Laboratory of the DPZ.

Within the framework of his PhD thesis, he intensively dealt with those brain areas of the cerebral cortex, which are responsible for the planning and execution of hand movements. In the course of his studies, he found out that visual information for objects that can be gripped, especially their three-dimensional shape and size are mainly processed in the AIP region. The transmission of the visual characteristics of an object in corresponding movement commands is mainly controlled in the areas F5 and M1.

To research the regulation of various grip movements in these regions of the brain in detail, the activity was recorded from neurons with so-called multi electrode arrays. The researchers have trained the rhesus monkeys to repeatedly grasp 50 objects of different shapes and sizes. In order to identify the grip types and to compare them with the neural signals, an electromagnetic data glove was used to record all the finger and hand movements of monkeys. 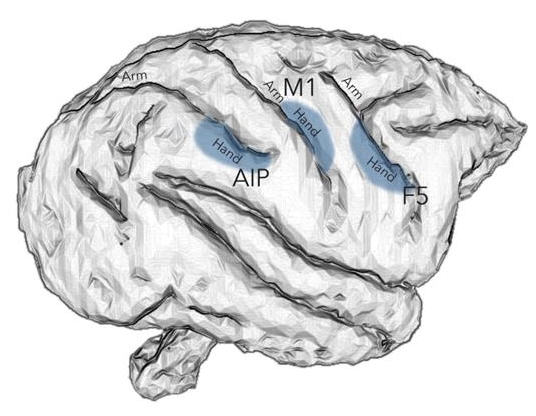 Hand movements in the primate brain are controlled by the brain areas AIP, F5 and M1. Figure: Stefan Schaffelhofer

“Prior to the start of a grasping movement, we have illuminated all the objects so that the monkeys could see them and recognize their shape," says Schaffelhofer. "The subsequent grasping movement then took place in the dark with a short delay. We were then able to separate the responses of the neurons to the visual stimuli in motor signals as well as examine the phase of motion planning."

Based on the activity of nerve cells measured during the planning and execution of the grasping movements, scientists could subsequently draw conclusions on the applied grip types. The predicted grips were compared to the actual hand configurations in the experiment.

"The activity of the measured brain cells is strongly dependent on the grip that was applied. Based on these neural differences, we can calculate the hand movement of the animal," says Schaffelhofer. "In the planning phase we predicted hand configurations with an accuracy of up to 86% and 92% for the gripping phase.

The decrypted hand configurations were subsequently successfully transferred to a robotic hand. With this, the scientists have shown that a large number of different hand configurations can be decoded and used from neuronal planning and execution signals. A finding, that is of great importance for the future of especially paraplegic patients where the connection between the brain and limbs no longer functions.

"The results of our study are very important for the development of neural-controlled prosthetic hands. They show where and especially how the brain controls grasping movements," says Schaffelhofer. "Unlike other applications, our method allows a prediction of the grip types in the planning phase of the movement. In future, this can be used to generate neural interface to read, interpret and control the motoric signals.”