News Staff
Why did the first human populations migrate out of Africa? It is the biggest debate in anthropology but no one can be sure of the answer. When it happened can at least be an informed debate and two hypotheses dominate the cultural landscape - but they both involve a common denominator that might shed light on why.

One popular belief is that human populations expanded rapidly from Africa to southern Asia via the coastlines of Arabia 50,000 or 60,000 years ago while another is that dispersal into the Arabian interior began 75,000 or even up to 130,000 years ago, but during multiple smaller phases as increased rainfall provided sufficient freshwater to support expanding populations.

A new paper uses an alluvial fan aggradation record from southeast Arabia spanning the past approximately 160,000 years. Situated along the proposed southern dispersal route, the Al Sibetah alluvial fan sequence provides a unique and sensitive record of landscape change in southeast Arabia. The authors say this record is the most comprehensive terrestrial archive from the Arabian Peninsula, and provides evidence for multiple humid episodes during both glacial and interglacial periods. 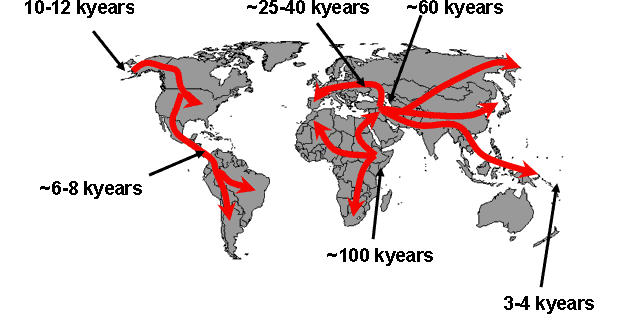 The leading belief about human dispersal. A new paper says it could have happened much earlier, as climate changed in bursts. Image: Max Planck Institute for Infection Biology. Link

Evidence from the Al Sibetah alluvial fan sequence indicates that during insolation maxima, increased monsoon rainfall led to the widespread activation of drainage systems and grassland development throughout regions that were important for the dispersal of early human populations.

Previously, the timing of episodes of increased humidity was largely linked to global interglacials, with the climate of Arabia during the intervening glacial periods believed to be too arid to support human populations. The authors suggest that periods of increased rainfall were not driven by mid-high latitude deglaciations every ~100,000 years, but by periods of maximum incoming solar radiation every ~23,000 years.

They write, "The occurrence of humid periods previously identified in lacustrine or speleothem records highlights the complexity and heterogeneity of the Arabian paleoclimate, and suggests that interior migration pathways through the Arabian Peninsula may have been viable approximately every 23,000 years since at least marine isotope state (MIS) 6," about 191 thousand years ago.

"The dispersal of early human populations out of Africa is dynamically linked with the changing climate and environmental conditions of Arabia. Although now arid, at times the vast Arabian deserts were transformed into landscapes littered with freshwater lakes and active river systems. Such episodes of dramatically increased rainfall were the result of the intensification and northward displacement of the Indian Ocean Monsoon, which caused rainfall to reach across much of the Arabian Peninsula."