The oldest submerged town in the world is about to give up its secrets — with the help of equipment that could revolutionise underwater archaeology.

The ancient town of Pavlopetri lies in three to four metres of water just off the coast of southern Laconia in Greece. The ruins date from at least 2800 BC through to intact buildings, courtyards, streets, chamber tombs and some thirty-seven cist graves which are thought to belong to the Mycenaean period (c.1680-1180 BC). This Bronze Age phase of Greece provides the historical setting for much Ancient Greek literature and myth, including Homer’s Age of Heroes.

Underwater archaeologist Dr Jon Henderson, from The University of Nottingham, will be the first archaeologist to have official access to the site in 40 years. Despite its potential international importance no work has been carried out at the site since it was first mapped in 1968 and Dr Henderson has had to get special permission from the Greek government to examine the submerged town. 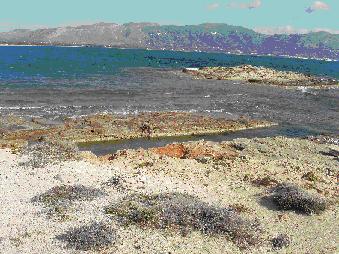 The now submerged site at Pavlopetri in south-eastern Laconia.  Credit: University of Nottingham

Although Mycenaean power was largely based on their control of the sea, little is known about the workings of the harbour towns of the period as archaeology to date has focused on the better known inland palaces and citadels. Pavlopetri was presumably once a thriving harbour town where the inhabitants conducted local and long distance trade throughout the Mediterranean — its sandy and well-protected bay would have been ideal for beaching Bronze Age ships. As such the site offers major new insights into the workings of Mycenaean society.

The aim of Dr Henderson’s project is to discover the history and development of Pavlopetri, find out when it was occupied, what it was used for and through a systematic study of the geomorphology of the area establish why the town disappeared under the sea.

Dr Henderson, from the Underwater Archaeology Research Centre (UARC) in the Department of Archaeology, said: “This site is of rare international archaeological importance. It is imperative that the fragile remains of this town are accurately recorded and preserved before they are lost forever. A fundamental aim of the project is to raise awareness of the importance of the site and ensure that it is ethically managed and presented to the public in a way which is sustainable and of benefit to both the development of tourism and the local community.”

The submerged buildings, courtyards, streets, tombs and graves, lie just off a sandy stretch of beach close to an area popular with holiday makers and campers. Under threat from tourism and industry the remains are being damaged by boats dragging their anchors, inquisitive snorkelers on the hunt for souvenirs and the growth of marine organisms which are also taking their toll degrading the fragile 3,500 year old walls.

The survey, in collaboration with Mr Elias Spondylis of the Ephorate of Underwater Antiquities of the Hellenic Ministry of Culture, will be carried out using equipment originally developed for the military and offshore oilfield market but looks set to transform underwater archaeological survey and recording.

Dr Henderson and his team will carry out a detailed millimeter accurate digital underwater survey of the site using an acoustic scanner developed by a major North American offshore engineering company. The equipment can produce photo-realistic, three dimensional digital surveys of seabed features and underwater structures to sub-millimetre accuracy in a matter of minutes.

Dr Henderson said: “The ability to survey submerged structures, from shipwrecks to sunken cities, quickly, accurately and more importantly, cost effectively, is a major obstacle to the future development of underwater archaeology. I believe we now have a technique which effectively solves this problem.”

Joining the team will be Dr Nicholas Flemming who discovered the site in 1967. The following year he led a team from the University of Cambridge who surveyed the area with hand tapes. The archaeological material — pottery, figurines, obsidian and small finds — they collected belong to the Early Helladic, Middle Helladic and Late Helladic period (c. 2800–1180 BC). A systematic assessment of the finds recovered at the time is currently being undertaken by Dr Chrysanthi Gallou at The University of Nottingham.

The project has received funding from the Institute of Aegean Prehistory (INSTAP), The University of Nottingham and the British School of Archaeology at Athens but it is still £10,000 short of the amount needed to carry out the main archaeological survey.

Four annual fieldwork seasons are planned. This May and June the team will carry out a full underwater survey. Between 2010 and 2012 there will be three seasons of underwater excavations. After a study season in 2013 the findings of Dr Henderson’s research will be published in 2014.