News Staff
There is no question there are genetic and environmental components to cancer but a statistical model that measures the proportion of cancer incidence across many tissue types finds that cancer is caused mainly by random mutations that occur when stem cells divide.

According to scientists from the Johns Hopkins Kimmel Cancer Center, two-thirds of adult cancer incidence across tissues can be explained primarily by "bad luck," when these random mutations occur in genes that can drive cancer growth, while the remaining third are due to environmental factors and inherited genes.

The implications of their model range from altering public perception about cancer risk factors to the funding of cancer research, they say. 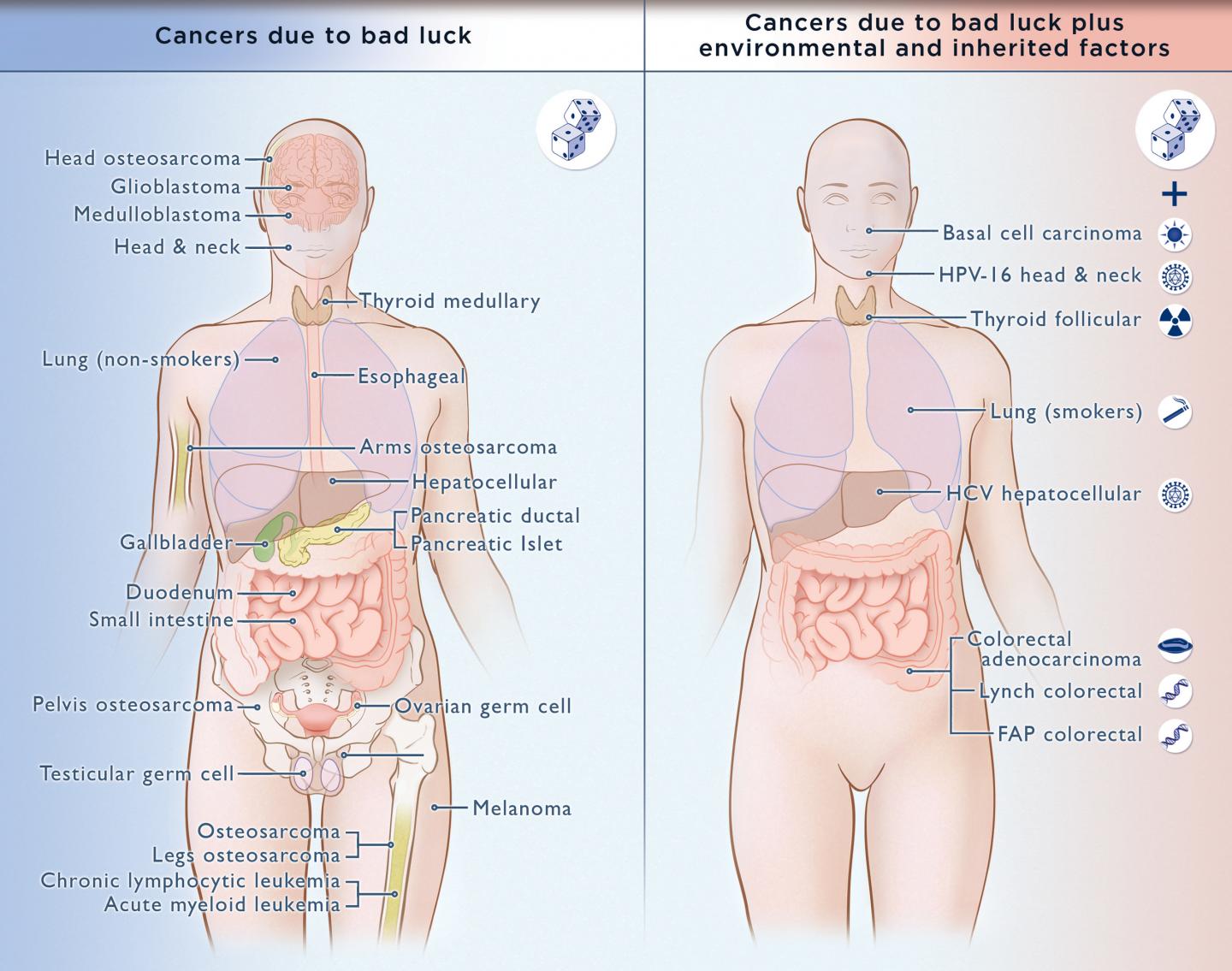 Is Bad Luck to Blame for Cancer-Prone Tissues? Cancers due to bad luck and cancers due to a combination of bad luck, environmental factors, and inherited factors are shown. This material relates to papers that appeared in the Jan. 2 2015 issue of Science, published by AAAS. Credit: [Elizabeth Cook

"If two-thirds of cancer incidence across tissues is explained by random DNA mutations that occur when stem cells divide, then changing our lifestyle and habits will be a huge help in preventing certain cancers, but this may not be as effective for a variety of others," says biomathematician Cristian Tomasetti, Ph.D., an assistant professor of oncology at the Johns Hopkins University School of Medicine and Bloomberg School of Public Health. "We should focus more resources on finding ways to detect such cancers at early, curable stages," he adds.

"All cancers are caused by a combination of bad luck, the environment and heredity, and we've created a model that may help quantify how much of these three factors contribute to cancer development," says Bert Vogelstein, M.D., the Clayton Professor of Oncology at the Johns Hopkins University School of Medicine, co-director of the Ludwig Center at Johns Hopkins and an investigator at the Howard Hughes Medical Institute.

"Cancer-free longevity in people exposed to cancer-causing agents, such as tobacco, is often attributed to their 'good genes,' but the truth is that most of them simply had good luck," adds Vogelstein, who cautions that poor lifestyles can add to the bad luck factor in the development of cancer.

In the Science article, Tomasetti and Vogelstein say they came to their conclusions by searching the scientific literature for information on the cumulative total number of divisions of stem cells among 31 tissue types during an average individual's lifetime. Stem cells "self-renew," thus repopulating cells that die off in a specific organ.

It was well-known, Vogelstein notes, that cancer arises when tissue-specific stem cells make random mistakes, or mutations, when one chemical letter in DNA is incorrectly swapped for another during the replication process in cell division. The more these mutations accumulate, the higher the risk that cells will grow unchecked, a hallmark of cancer. The actual contribution of these random mistakes to cancer incidence, in comparison to the contribution of hereditary or environmental factors, was not previously known, says Vogelstein.

"Our study shows, in general, that a change in the number of stem cell divisions in a tissue type is highly correlated with a change in the incidence of cancer in that same tissue," says Vogelstein. One example, he says, is in colon tissue, which undergoes four times more stem cell divisions than small intestine tissue in humans. Likewise, colon cancer is much more prevalent than small intestinal cancer.

"You could argue that the colon is exposed to more environmental factors than the small intestine, which increases the potential rate of acquired mutations," says Tomasetti. However, the scientists saw the opposite finding in mouse colons, which had a lower number of stem cell divisions than in their small intestines, and, in mice, cancer incidence is lower in the colon than in the small intestine. They say this supports the key role of the total number of stem cell divisions in the development of cancer.

Using statistical theory, the pair calculated how much of the variation in cancer risk can be explained by the number of stem cell divisions, which is 0.804 squared, or, in percentage form, approximately 65 percent.

Finally, the research duo classified the types of cancers they studied into two groups. They statistically calculated which cancer types had an incidence predicted by the number of stem cell divisions and which had higher incidence. They found that 22 cancer types could be largely explained by the "bad luck" factor of random DNA mutations during cell division. The other nine cancer types had incidences higher than predicted by "bad luck" and were presumably due to a combination of bad luck plus environmental or inherited factors.

"We found that the types of cancer that had higher risk than predicted by the number of stem cell divisions were precisely the ones you'd expect, including lung cancer, which is linked to smoking; skin cancer, linked to sun exposure; and forms of cancers associated with hereditary syndromes," says Vogelstein.

"This study shows that you can add to your risk of getting cancers by smoking or other poor lifestyle factors. However, many forms of cancer are due largely to the bad luck of acquiring a mutation in a cancer driver gene regardless of lifestyle and heredity factors. The best way to eradicate these cancers will be through early detection, when they are still curable by surgery," adds Vogelstein.