10 percent of the world's ants are close relatives, belong to just one genus out of 323. That genus is  called Pheidole. Pheidole fill niches in ecosystems ranging from rainforests to deserts.

"If you go into any tropical forest and take a stroll, you will step on one of these ants," says Okinawa Institute of Science and Technology Graduate University's Professor Evan Economo, who, along with researchers in the Biodiversity and Biocomplexity Unit and colleagues at the University of Michigan compared gene sequences from 300 species of Pheidole from around the world. They used these sequences to construct a tree that shows when and where each species evolved into new species.

At the same time, in a parallel effort, they scoured the academic literature, museums around the world, and large databases to aggregate data on where all 1200 or so Pheidole species live on Earth, creating a range map for each species. 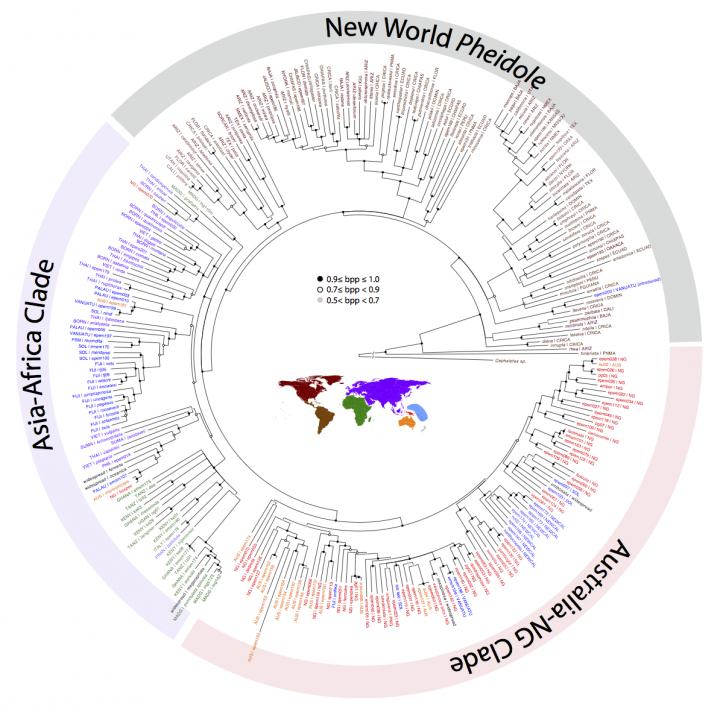 This chart shows the evolutionary relationship between 300 Pheidole species from all over the world. Each species fits neatly into a group by region, showing that. Credit OIST

Economo began this project by selecting sample ants to represent each Pheidole species. The team then sequenced the samples' DNA to determine genetic similarities between species, and computationally reconstruct the "family tree" of Pheidole species, providing a history of how they evolved. This may seem like a lot of effort for a group of seemingly inconsequential creatures, but in fact many ecologists use ants to better understand evolution and the terrestrial ecosystems ants inhabit. "Ants are a good test case," said Economo. Ants are abundant in most terrestrial ecosystems, often accounting for as much biomass as all vertebrates combined. They serve important roles such as soil aeration, nutrient cycling, and dispersing plant seeds. They also have economic consequences for humans; certain ant species become pests and cause billions of dollars of damage. In addition, their social behavior interests many researchers, so even if they are not as well studied as mammals or birds, there is a relatively large library of research compared to other arthropods. Because of their global ubiquity, Pheidole ants in particular offer ecologists a view into a wide range of ecosystems. Therefore, understanding Pheidole evolution impacts far more than just our understanding of ants.

Economo compared the Pheidole evolutionary tree with the range map showing where each Pheidole species lives. One might think that with hundreds of species living on almost every continent, there have been lots of movements and colonizations around the world. But if that were the case, Economo would find species that are close relatives living in different continents. Instead, Economo found that the genus was split into two main groups of evolutionary relatives: one in the New World, or the Americas, and one in the Old World, or Europe, Asia, Africa, and Australia.

Pheidole species also show a climate pattern: there tend to be more Pheidole in warm, wet climates. "They are dominant in certain areas preferentially to others," Economo said, "and these patterns are consistent even though they evolved independently." This suggests that evolution repeated itself, and is to some extent deterministic. That is, there is likely a reason why Pheidole dominate tropical ecosystems: they didn't just become successful due to random chance. "One idea is that they have a key innovation, something that gives them an advantage over other species," said Economo. "That certainly could be true but we don't know what that advantage is at this point."

Moving forward, Economo hopes to learn how so many Pheidole species can coexist by studying how they forage for food, nest, and otherwise thrive in their local environments. Knowing these habits would help understand whether Pheidole is the best at surviving, or whether its environment can simply support more ant species.

"That's a big question for our field in general," Economo said, "not just in ants. This is an extremely difficult genus to work with because they are so diverse and hard to identify so hopefully our work will help scientists get a better handle on these organisms that are dominant features of many of Earth's ecosystems."