News Staff
Games have been test beds for new ideas in Artificial Intelligence (AI) since computers came on the scene and there have been significant milestones - Deep Blue sort of defeated Kasparov in chess and Watson sort of defeated Jennings and Rutter on Jeopardy!

But solving a game is a lot tougher than defeating a player, though researchers in the Computer Poker Research Group at the University of Alberta in Canada say they have essentially solved heads-up limit hold'em poker.

Poker is a family of games that exhibit imperfect information, where players do not have full knowledge of past events. The most popular variant of poker today is Texas hold'em. When it is played with just two-players (heads-up) and with fixed bet-sizes and number of raises (limit), it is called heads-up limit hold'em. 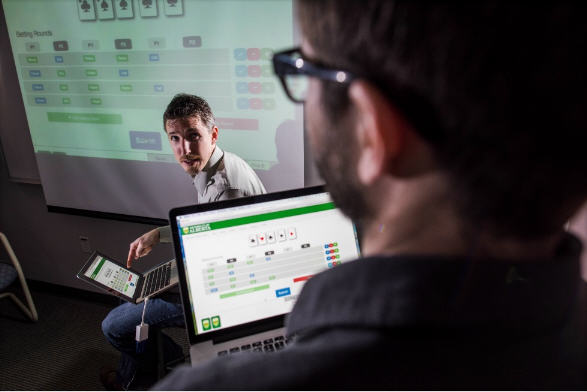 "Poker has been a challenge problem for artificial intelligence going back over 40 years, and until now, heads-up limit Texas hold'em poker was unsolved," says Bowling lead author of the paper.

While smaller than checkers, the imperfect information nature of heads-up limit hold'em makes it a far more challenging game for computers to play or solve.

"We define a game to be essentially solved if a lifetime of play is unable to statistically differentiate it from being solved at 95% confidence," explains Bowling. "Imagine someone playing 200 hands of poker an hour for 12 hours a day without missing a day for 70 years. Furthermore imagine them employing the worst-case, maximally exploitive, opponent strategy, and never making a mistake."

"The breakthroughs behind this result are general algorithmic advances that make game-theoretic reasoning in large-scale models of any sort more tractable," says Bowling.

And, while seemingly playful, game theory has always been envisioned to have serious implications, including a surge in game-theoretic applications involving security, such as systems being deployed for airport checkpoints, air marshal scheduling, and coast guard patrolling. With real-life decision-making settings almost always involving uncertainty and missing information, algorithmic advances, such as those needed to solve poker, are needed to drive future applications.

You can query the program's strategy or play against it yourself online at: http://poker.srv.ualberta.ca.