Prehistoric Continental Shelf: Tracing Our Ancestors At The Bottom Of The Sea
By News Staff | October 28th 2014 09:16 AM | Print | E-mail

The social sciences have simultaneously become increasingly specialized and over-lapping. A new field calls itself Continental Shelf Prehistoric Research and it studies the remains of prehistoric human settlements which are now submerged beneath coastal waters.

Some of the now-drowned sites are tens of thousands of years old, requiring archaeologists to get help from oceanography and the geosciences. A recent paper describes how during the successive ice ages of the last million years, the sea level dropped at times by up to 120 meters and the exposed area of the continental shelf added 40% to the land area of Europe; a terrain occupied by vegetation, fauna, and people.

Consequently, many of the remains and artifacts of Europe's prehistory are now underwater. 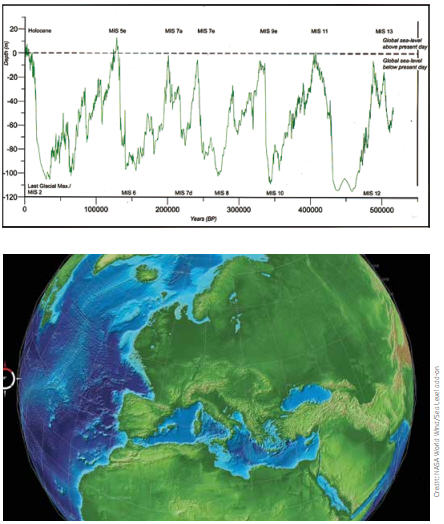 A lot different from today. Who or what lived on the new land? Was it inhabitable by people or animals? At what dates or periods in the past was the land exposed? How did the enlarged geography of Europe affect migrations into the continent from Africa and the Middle East? How did people respond to falling sea levels, and how did they preserve their basis of subsistence when the land was inundated again? How did they react to continuous climate change? When did humans, or our hominin precursors, first learn to exploit fishing and shellfish, and where and when did they build the first rafts or boats? What unique configurations of fauna, vegetation and people existed during those climatically unique times on the exposed shelves producing the antecedents of the more recent marine provinces, especially from the mid-Holocene?

More than 2,500 submerged prehistoric artifact assemblages, ranging in age from 5,000 to 300,000 years, have been found in the coastal waters and open sea basins around Europe. Only a few have been properly mapped by divers, or assessed for preservation or excavation. These remains contain information on ancient seafaring, and the social structures and exploitation technologies of coastal resources before the introduction of agriculture some 10,000 years ago.

To understand how prehistoric people responded to changing sea level, researchers combine examinations of these deposits with palaeoclimate models, reconstructions of ice-cap and sea level curves, and sophisticated survey and excavation techniques.

The paper reports that seabed prehistoric remains are being destroyed by natural erosion and industrial disturbance. The paper stresses that Europe's submerged prehistory needs to be studied at a sea basin scale, and integrated at European level, which cannot be funded adequately by universities and national agencies alone. Compliance with the UNESCO convention on Underwater Cultural Heritage, and other treaties and directives, can only be ensured by collaboration and funding at European level.

The existing research community is sparse and scattered, and a new emphasis is needed for training marine archaeologists in Continental Shelf Prehistoric Research, while promoting collaboration with engineers, climate change experts and numerical modelers.

Many initial findings are made by industrial operations, whose role can be strengthened by improving collaboration with national cultural heritage agencies and academics, both to encourage the reporting of findings and to map, protect, and where appropriate, excavate the archaeological materials such as hut foundations, hearths, food remains, skeletons, shaped flint tools, hand axes, and paddles for canoes embedded in the sediments on the sea floor.

The European Marine Board (EMB) Working Group, comprising experts from 11 European nations and chaired by Dr. Nicholas Flemming of the UK National Oceanography Centre, presented their recommendations after discussions over a 12 month period. The new position paper provides a comprehensive overview of recent progress in the study of our submerged cultural heritage and sets out key research questions and policy priorities needed to support this research in the future.

It is an invaluable resource for policy makers, research funders and scientists alike. Professor Jan Mees, Chair of the European Marine Board, explains its importance: "our submerged cultural heritage is not a renewable resource; it is a unique irreplaceable cultural asset which can provide answers to many research questions about our prehistoric ancestors, landscapes and climate."