News Staff
The Internet of Things is Web 2.0 of 2004 or Big Data of 2013 - a great buzzword that marketing groups are trying to exploit by rebranding what already exists. But the promise, the idea that everything in the human environment, from kitchen appliances to industrial equipment, could be equipped with sensors and processors that can exchange data, helping with maintenance and the coordination of tasks, is real.

Yet there is a huge barrier, in a world that would like to reduce greenhouse gases without actually embracing energy that produces no greenhouse gases, like nuclear science - the energy drain of the off-state power, the leakage power, of all those transmitters that are just idling much of the time.

The Internet of Things means a lot of them, and they have to be powerful enough to broadcast to devices dozens of yards away and still have extremely low standby power while waiting for some event to trigger a communication.

This week, at the Institute of Electrical and Electronics Engineers’ International Solid-State Circuits Conference,  Anantha Chandrakasan, the Joseph F. and Nancy P. Keithley Professor in Electrical Engineering at MIT, and colleagues are presenting a new transmitter design that reduces off-state leakage 100-fold. At the same time, it provides adequate power for Bluetooth transmission, or for the even longer-range 802.15.4 wireless-communication protocol. 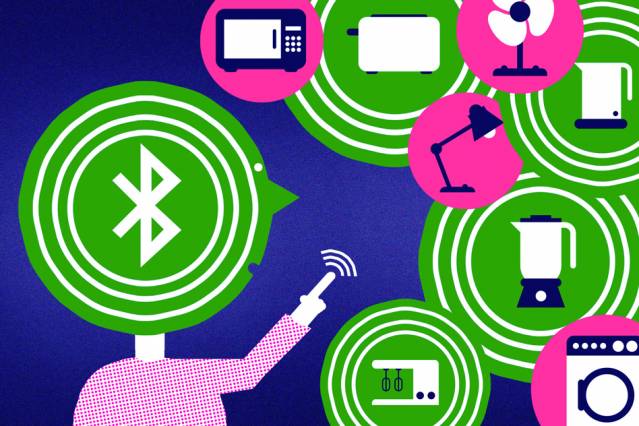 “The trick is that we borrow techniques that we use to reduce the leakage power in digital circuits,” Chandrakasan explains. The basic element of a digital circuit is a transistor, in which two electrical leads are connected by a semiconducting material, such as silicon. In their native states, semiconductors are not particularly good conductors. But in a transistor, the semiconductor has a second wire sitting on top of it, which runs perpendicularly to the electrical leads. Sending a positive charge through this wire — known as the gate — draws electrons toward it. The concentration of electrons creates a bridge that current can cross between the leads.

But while semiconductors are not naturally very good conductors, neither are they perfect insulators. Even when no charge is applied to the gate, some current still leaks across the transistor. It’s not much, but over time, it can make a big difference in the battery life of a device that spends most of its time sitting idle.

Going negative
Chandrakasan — along with Arun Paidimarri, an MIT graduate student in electrical engineering and computer science and first author on the paper, and Nathan Ickes, a research scientist in Chandrakasan’s lab — reduces the leakage by applying a negative charge to the gate when the transmitter is idle. That drives electrons away from the electrical leads, making the semiconductor a much better insulator.

Of course, that strategy works only if generating the negative charge consumes less energy than the circuit would otherwise lose to leakage. In tests conducted on a prototype chip fabricated through the Taiwan Semiconductor Manufacturing Company’s research program, the MIT researchers found that their circuit spent only 20 picowatts of power to save 10,000 picowatts in leakage.

To generate the negative charge efficiently, the MIT researchers use a charge pump, which is a small network of capacitors — electronic components that can store charge — and switches. When the charge pump is exposed to the voltage that drives the chip, charge builds up in one of the capacitors. Throwing one of the switches connects the positive end of the capacitor to the ground, causing a current to flow out the other end. This process is repeated over and over. The only real power drain comes from throwing the switch, which happens about 15 times a second.

To make the transmitter more efficient when it’s active, the researchers adopted techniques that have long been a feature of work in Chandrakasan’s group. Ordinarily, the frequency at which a transmitter can broadcast is a function of its voltage. But the MIT researchers decomposed the problem of generating an electromagnetic signal into discrete steps, only some of which require higher voltages. For those steps, the circuit uses capacitors and inductors to increase voltage locally. That keeps the overall voltage of the circuit down, while still enabling high-frequency transmissions.

What those efficiencies mean for battery life depends on how frequently the transmitter is operational. But if it can get away with broadcasting only every hour or so, the researchers’ circuit can reduce power consumption 100-fold.

“Ultralow leakage energy is critical for future sensor nodes that need the transmitter to be on only a very small percentage of time,” says Baher Haroun, director of the Embedded Processing Systems Labs at Texas Instruments (TI), which helped fund the MIT researchers’ work. “Working with Anantha’s research team on ultralow-power circuit and system ideas has always been beneficial to TI. We learn from his team’s novel approaches and depth of understanding of the ultralow-power methods that apply to multiple functions, from digital to [radio frequency].”

The research was also funded by Shell.
News Articles
More Articles All Articles
About