News Staff
Hey, does anyone want this comet?

For the first time, mankind has successfully landed on a comet - a journey over 10 years in the making.

After a seven-hour final descent, Rosetta’s Philae probe signaled from the surface of Comet 67P/Churyumov–Gerasimenko and the message arrived on Earth at 16:03 GMT, completing the longest part of a 4 billion mile journey through the solar system.

The landing site, named Agilkia and located on the head of the bizarre double-lobed object, was chosen based on images and data collected at distances of 30–100 km from the comet. Those first images soon revealed the comet as a world littered with boulders, towering cliffs and daunting precipices and pits, with jets of gas and dust streaming from the surface. 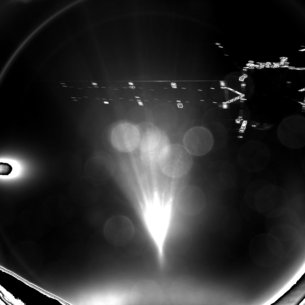 Touchdown was planned to take place at a speed of around 1 meter per second, with the three-legged landing gear absorbing the impact to prevent rebound, and an ice screw in each foot driving into the surface. At the same time, two harpoons fired and locked the probe onto the surface but during the final health checks of the lander before separation, a problem was detected with the small thruster on top that was designed to counteract the recoil of the harpoons to push the lander down onto the surface.

So if the harpoons did not work, what is holding it in place? Ice screws.

The conditions of landing – including whether or not the thruster performed – along with the exact location of Philae on the comet are now being analyzed but deployment was confirmed at 09:03 GMT at a distance of 22.5 km from the center of the comet. During the seven-hour descent, which was made without propulsion or guidance, Philae took images and recorded information about the comet’s environment.

“One of the greatest uncertainties associated with the delivery of the lander was the position of Rosetta at the time of deployment, which was influenced by the activity of the comet at that specific moment, and which in turn could also have affected the lander’s descent trajectory,” said Sylvain Lodiot, ESA Rosetta Spacecraft Operations Manager. “Furthermore, we’re performing these operations in an environment that we’ve only just started learning about, 510 million kilometers from Earth.”

The first images from the surface are being downlinked to Earth and should be available within a few hours of touchdown.

“We are extremely relieved to be safely on the surface of the comet, especially given the extra challenges that we faced with the health of the lander,” said Stephan Ulamec, Philae Lander Manager at the DLR German Aerospace Center.