News Staff
When Twitter began, they wanted to limit to 140 characters to conserve bandwidth. So users ironically (because it led to more bandwidth usage) began circumventing that by using images. Those are worth 1,000 words, according to now=popular wisdom from Frederick R. Barnard in an article in Printer's Ink from 1921.

But how many emotions is that?

Researchers at Adobe Research and  the University of Rochester have come up with a more accurate way than currently possible to train computers to be able to digest data that comes in the form of images. In a paper presented last week at the American Association for Artificial Intelligence (AAAI) conference in Austin, they describe what they refer to as a progressive training deep convolutional neural network (CNN). The trained computer can then be used to determine what sentiments these images are likely to elicit.  Jiebo Luo, professor of computer science at the University of Rochester, says that this information could be useful for things as diverse as measuring economic indicators or predicting elections.

Sentiment analysis of text by computers is itself a challenging task. And in social media, sentiment analysis is more complicated because many people express themselves using images and videos, which are more difficult for a computer to understand.

For example, during a political campaign voters will often share their views through pictures. Two different pictures might show the same candidate, but they might be making very different political statements. A human could recognize one as being a positive portrait of the candidate (e.g. the candidate smiling and raising his arms) and the other one being negative (e.g. a picture of the candidate looking defeated). But no human could look at every picture shared on social media - it is truly "big data."

To be able to make informed guesses about a candidate's popularity, computers need to be trained to digest this data, which is what Luo and his collaborators' approach can do more accurately than was possible until now. 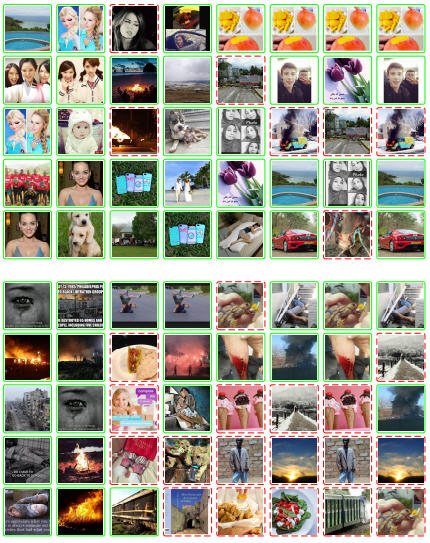 Positive (top block) and Negative (bottom block) examples. Each column shows the negative example images for each algorithm (PCNN, CNN, Sentribute, Sentibank, GCH, LCH, GCH+BoW, LCH+BoW). The images are ranked by the prediction score from top to bottom in a decreasing order.

The researchers treat the task of extracting sentiments from images as an image classification problem. This means that somehow each picture needs to be analyzed and labels applied to it.

To begin the training process, Luo and his collaborators used a huge number of Flickr images that have been loosely labeled by a machine algorithm with specific sentiments, in an existing database known as SentiBank (developed by Professor Shih-Fu Chang's group at Columbia University). This gives the computer a starting point to begin understanding what some images can convey. But the machine-generated labels also include a likelihood of that label being true, that is, how sure is the computer that the label is correct? The key step of the training process comes next, when they discard any images for which the sentiment or sentiments with which they have been labeled might not be true. So they use only the "better" labeled images for further training in a progressively improving manner within the framework of the powerful convolutional neural network. They found that this extra step significantly improved the accuracy of the sentiments with which each picture is labeled.

They also adapted this sentiment analysis engine with some images extracted from Twitter. In this case they employed "crowd intelligence," with multiple people helping to categorize the images via the Amazon Mechanical Turk platform. They used only a small number of images for fine-tuning the computer and yet, by applying this domain-adaptation process, they showed they could improve on current state of the art methods for sentiment analysis of Twitter images. One surprising finding is that the accuracy of image sentiment classification has exceeded that of the text sentiment classification on the same Twitter messages.