Smartphones Are Changing How Our Brains And Thumbs Work Together
By News Staff | December 29th 2014 10:30 AM | Print | E-mail

When people spend time interacting with their smartphones, it is changing the way their thumbs and brains work together, according to a report in Current Biology.

More touchscreen use in the recent past translates directly into greater brain activity when the thumbs and other fingertips are touched, the study found. And smartphones have become a good way to explore the everyday plasticity of the human brain.

Not only are people suddenly using their fingertips, and especially their thumbs, in a new way, but many are doing it an awful lot, day after day. Our phones are also keeping track of our digital histories to provide a readymade source of data on those behaviors. 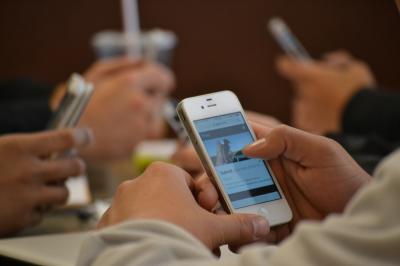 "I was really surprised by the scale of the changes introduced by the use of smartphones," says Arko Ghosh of the University of Zurich and ETH Zurich in Switzerland. "I was also struck by how much of the inter-individual variations in the fingertip-associated brain signals could be simply explained by evaluating the smartphone logs.

"I think first we must appreciate how common personal digital devices are and how densely people use them. What this means for us neuroscientists is that the digital history we carry in our pockets has an enormous amount of information on how we use our fingertips (and more)."

While neuroscientists have long studied brain plasticity in expert groups--musicians or video gamers, for instance--smartphones present an opportunity to understand how regular life shapes the brains of regular people.

To link digital footprints to brain activity in the new study, Ghosh and his team used electroencephalography (EEG) to record the brain response to mechanical touch on the thumb, index, and middle fingertips of touchscreen phone users in comparison to people who still haven't given up their old-school mobile phones.

The researchers found that the electrical activity in the brains of smartphone users was enhanced when all three fingertips were touched. In fact, the amount of activity in the cortex of the brain associated with the thumb and index fingertips was directly proportional to the intensity of phone use, as quantified by built-in battery logs.

The thumb tip was even sensitive to day-to-day fluctuations: the shorter the time elapsed from an episode of intense phone use, the researchers report, the larger was the cortical potential associated with it.

The results suggest to the researchers that repetitive movements over the smooth touchscreen surface reshape sensory processing from the hand, with daily updates in the brain's representation of the fingertips. And that leads to a pretty remarkable idea: "We propose that cortical sensory processing in the contemporary brain is continuously shaped by personal digital technology," Ghosh and his colleagues write.

What exactly this influence of digital technology means for us in other areas of our lives is a question for another day. The news might not be so good, Ghosh and colleagues say, noting evidence linking excessive phone use with motor dysfunctions and pain.