Mother Nature may be out to kill us but we shouldn't take it personally. She is out to kill everything. We just never noticed in the past.

Today, thanks to long-term science projects, we can see how nature pits species off against each other. And biologists are studying streams to optimize how to prevent tallgrass prairies from turning into shrublands and forests.

Forests are bad? No, but they are different and they are popular in the environmental movement, Grasslands in North America and across the globe are rapidly disappearing and woody plants are expanding, including converting grasslands into forest ecosystems. This change in environment can affect stream hydrology and biogeochemistry.

One of the factoids lost on non-science conservation is that sometimes you just want to leave things alone. Trees are not the solution to everything. Let's have a meadow. And let's clear out dead trees and let things burn once in a while. 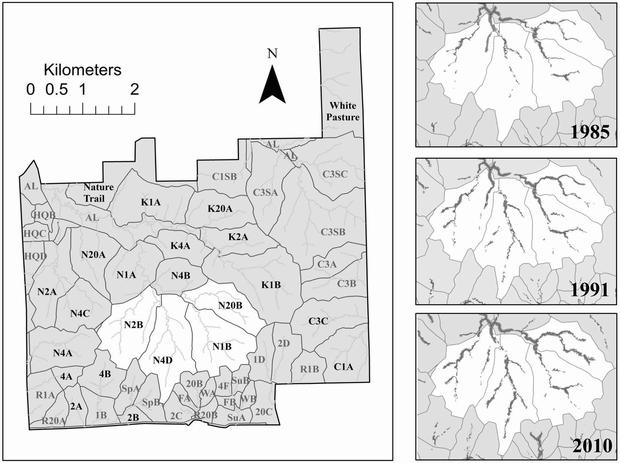 Spatial extent of woody plant species within a 30 m riparian buffer across the 4 watersheds of the Kings Creek basin monitored for stream discharge during 1985, 1991, and 2010. Woody vegetation cover within a 30 m buffer riparian zone is highlighted in gray for all three years for the 4 watersheds monitored. The 22 watersheds included in the analysis are labeled with black text whereas those not included are labeled in gray. doi:10.1371/journal.pone.0106922.g001

In recent research, Allison Veach, doctoral student in biology, Muncie, Indiana, and Walter Dodds, university distinguished professor of biology at Kansas State, studied 25 years of aerial photography of
the Konza Prairie Biological Station
and observed the expansion of trees and shrubs in riparian areas, which include areas within 30 meters of streambeds. The researchers focused on three factors that affect grassland streams: burn intervals; grazers, such as bison; and the historical presence of woody vegetation.

Their analysis revealed an important finding: Burn intervals predicted the rate of woody vegetation expansion. Burning every one to two years slowed the growth of trees and shrubs, Veach said.

"Although we can reduce woody expansion by burning more frequently, we can't prevent it from occurring over time," Veach said. "Woody plant encroachment may not be prevented by fire alone."

The research shows the importance of burning to maintain the tallgrass prairie, Dodds said. While burning can help to slow the expansion of trees and shrubs, additional actions are need to maintain quickly disappearing grassland ecosystems.

Woody vegetation also may be expanding in grasslands because of more carbon dioxide in the atmosphere, Dodds said. Grasses and trees compete for carbon dioxide, and grasses are much better at conserving water and efficiently using carbon dioxide. As atmospheric carbon dioxide levels increase, it becomes easier for trees to gather carbon dioxide and gives them a growing advantage over grasses.

"The tallgrass prairie is almost nonexistent on the globe," Veach said. "In order for us to preserve tallgrass prairie, we need to look at woody encroachment because it has been an issue. Things like no fire or differences in climate change may allow woody plant species to competitively take over grasslands."

The biologists plan to continue studying water quality and quantity issues at Konza. Konza is an 8,600-acre tallgrass prairie ecological research site jointly owned by the university and The Nature Conservancy.