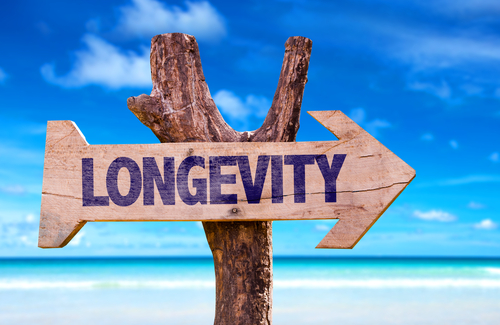 Living longer usually means a longer dotage, with more pills and disease risk for more decades rather than aging well. What would be better? Extended young adulthood, when we are at our primes.

In the study in eLife, researchers administered an antidepressant called mianserin to Caenorhabditis elegans, a type of roundworm used frequently in research. In 2007, they discovered that the drug increases the lifespan of roundworms by 30-40 percent and they wanted to find out how so they treated thousands of worms with either water or mianserin and looked at the activity of genes as the worms aged. First, they measured the activity of genes in young adults as a reference point against which to monitor the aging process. Reproductive maturity begins in day-old roundworms and they live for 2-3 weeks on average.

As the worms aged, the team observed dramatic changes in gene expression. However, the changes occurred in a way that came as a complete surprise. Groups of genes that together play a role in the same function were found to change expression in opposing directions.

They have called this newly-discovered phenomenon 'transcriptional drift'. By examining data from mice and from 32 human brains aged 26 to 106 years, they confirmed that it also occurs in mammals.

"The orchestration of gene expression no longer seemed coordinated as the organism aged and the results were confusing because genes related to the same function were going up and down at the same time," says lead author Michael Petrascheck from The Scripps Research Institute (TSRI), California.

"Transcriptional drift can be used as a new metric for measuring age-associated changes that start in young adulthood," says first author Sunitha Rangaraju. "Until now we have been dependent on measuring death rates, which are too low in young adults to provide much data. Having a new tool to study aging could help us make new discoveries, for example to treat genetic predispositions where aging starts earlier, such as Hutchinson-Gilford progeria syndrome."

Using this new metric revealed that treatment with mianserin can suppress transcriptional drift, but only when administered at the right time of life. By 10 days old, treated worms still had the gene expression characteristics of a three-day-old -- physiologically they were seven days younger. But by 12 days, the physiological changes required to extend lifespan were complete and lifelong exposure to the drug had no additional effect. Mortality rates were shifted parallel by 7-8 days across the treated worms' lifespan, confirming the finding.

Mianserin blocked signals related to the regulation of serotonin and this delayed physiological changes associated with age, including the newly-identified transcriptional drift and degenerative processes that lead to death. The effect only occurred during young adulthood and the duration of this period of life was significantly extended.

"How much of our findings with regards to lifespan extension will spill over to mammals is anyone's guess, for example the extension of lifespan might not be as dramatic," says Petrascheck. "However, we are already excited about the fact that we observed the phenomenon of transcriptional drift in species ranging from worms, mice to humans."