News Staff
The most crowded collision of galaxy clusters has been identified by combining information from three different telescopes. This result gives scientists a chance to learn what happens when some of the largest objects in the Universe go at each other in a cosmic free-for-all.

Using data from NASA's Chandra X-ray Observatory, Hubble Space Telescope and the Keck Observatory on Mauna Kea, Hawaii, astronomers were able to determine the three-dimensional geometry and motion in the system MACSJ0717.5+3745 (or MACSJ0717 for short) located about 5.4 billion light years from Earth.

The researchers found that four separate galaxy clusters are involved in a triple merger, the first time such a phenomenon has been documented. Galaxy clusters are the largest objects bound by gravity in the Universe.


Animation shows the massive galaxy cluster MACSJ0717.5+3745 (MACSJ0717, for short), where four separate galaxy clusters have been involved in a collision, the first time such a phenomenon has been documented.  Credit: NASA/CXC/IfA/C. Ma et al.

In MACSJ0717, a 13-million-light-year-long stream of galaxies, gas and dark matter – known as a filament - is pouring into a region already full of galaxies. Like a freeway of cars emptying into a full parking lot, this flow of galaxies has caused one collision after another.

"In addition to this enormous pileup, MACSJ0717 is also remarkable because of its temperature," said Cheng-Jiun Ma of the University of Hawaii and lead author of the study. "Since each of these collisions releases energy in the form of heat, MACS0717 has one of the highest temperatures ever seen in such a system."

While the filament leading into MACJ0717 had been previously discovered, these results show for the first time that it was the source of this galactic pummeling. The evidence is two-fold. First, by comparing the position of the gas and clusters of galaxies, the researchers tracked the direction of clusters' motions, which matched the orientation of the filament in most cases. Secondly, the largest hot region in MACSJ0717 is where the filament intersects the cluster, suggesting ongoing impacts.

"MACSJ0717 shows how giant galaxy clusters interact with their environment on scales of many millions of light years," said team member Harald Ebeling, also from University of Hawaii. "This is a wonderful system for studying how clusters grow as material falls into them along filaments."

Computer simulations show that the most massive galaxy clusters should grow in regions where large-scale filaments of intergalactic gas, galaxies, and dark matter intersect, and material falls inward along the filaments. 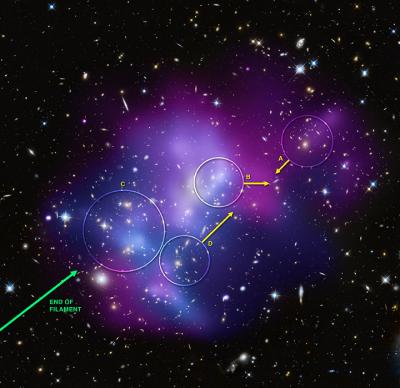 A labeled version of the MACSJ0717 image shows the galaxies in the four different clusters -- identified by the letters "A," "B," "C," and "D" -- involved in the collision, plus the direction of motion for the three fastest moving clusters. The length of the arrow shows the approximate speed in a direction perpendicular to the line of sight. Note that the direction of motion of the clusters is roughly parallel to the direction of the filament. Data from Keck Observatory was used to derive the speed of the clusters along the line of sight, allowing the three-dimensional geometry and dynamics of MACSJ0717 to be derived. The cooler (redder) region of gas towards the lower left of the cluster labeled "D" has likely survived from before the collision. Cluster A is likely falling back into the main cluster after already having passed through once in the opposite direction. Both of these clusters probably originated from the filament. Cluster B, however, has a much higher speed than the other clusters along the line of sight and its origin is unclear. It may have fallen along the outer edge of the filament, causing its infall trajectory to curve, or it may be falling in along another, smaller filament. The good alignment between the galaxies and hot gas for cluster C. along with its motion compared to MACSJ0717 as a whole makes this system a good candidate for the core of the main cluster. The large region of relatively hot gas (shown in blue) that extends from the left side of cluster C to the right side of region D may be caused by heating as significant quantities of gas from the filament plough into the main cluster.  Credit: X-ray: NASA/CXC/IfA/C. Ma et al. Optical: NASA/STScI/IfA/C. Ma et al.

"It's exciting that the data we get from MACSJ0717 appear to beautifully match the scenario depicted in the simulations," said Ma.

Multiwavelength data were crucial for this work. The optical data from Hubble and Keck give information about the motion and density of galaxies along the line of sight, but not about their course perpendicular to that direction. By combining the X-ray and optical data, scientists were able to determine the three-dimensional geometry and motion in the system.

In the future, Ma and his team hope to use even deeper X-ray data to measure the temperature of gas over the full 13-million-light-year extent of the filament. Much remains to be learned about the properties of hot gas in filaments and whether its infall along these structures can significantly heat the gas in clusters over large scales.

"This is the most spectacular and most disturbed cluster I have ever seen," says Ma, "and we think that we can learn a whole lot more from it about how structure in our Universe grows and evolves."