What makes Americans afraid is the topic of the first comprehensive nationwide study by Chapman University. According to the Chapman poll, the number one fear in America today is not Muslim terrorists or Russian imperialism or Ebola, it's...walking alone at night.

The Chapman Survey on American Fears included 1,500 nationally representative participants. The top five things Americans fear the most are: 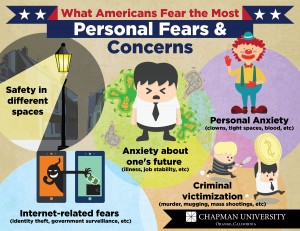 “What initially lead us into this line of research was our desire to capture this information on a year-over-year basis so we can draw comparisons with what items are increasing in fear as well as decreasing,” said Dr. Christopher Bader, who led the team effort. “We learned through this initial survey that we had to phrase the questions according to fears vs. concerns to capture the information correctly, so that is how we present it,” Bader continued.

The top five things Americans worry or are concerned about are:

“The sky is falling (and a serial killer is chasing me)”

Turning to the crime section of the Chapman Survey on American Fears, the team discovered findings that not only surprised them, but also those who work in fields pertaining to crime.

“What we found when we asked a series of questions pertaining to fears of various crimes is that a majority of Americans not only fear crimes such as, child abduction, gang violence, sexual assaults and others; but they also believe these crimes (and others) have increased over the past 20 years,” said Dr. Edward Day who led this portion of the research and analysis. “When we looked at statistical data from police and FBI records, it showed crime has actually decreased in America in the past 20 years. Criminologists often get angry responses when we try to tell people the crime rate has gone down.”

Despite evidence to the contrary, Americans do not feel like the United States is becoming a safer place. The Chapman Survey on American Fears asked how they think prevalence of several crimes today compare with 20 years ago. In all cases, the clear majority of respondents were pessimistic; and in all cases Americans believe crime has at least remained steady. Crimes specifically asked about were: child abduction, gang violence, human trafficking, mass riots, pedophilia, school shootings, serial killing and sexual assault. Chapman’s growth in global climate change research and extreme events led another portion of The Chapman Survey on American Fears into the area of natural disasters and people’s preparedness. The findings showed that despite widespread fear, the vast majority of those surveyed do not have emergency kits—even in regions hardest hit by natural disasters.

The top five most feared natural disasters by Americans are: Despite these fears, only 25 percent of Americans have a disaster preparedness kit that includes food, water, clothing and medical supplies.

“Our research indicated that Americans are aware, but better communication strategies are needed to encourage the nearly 75 percent who are unprepared for catastrophe,” said Dr. Ann Gordon, who led this portion of the survey. “We are conducting follow-up studies to examine why so many Americans remain unprepared despite lessons learned from recent natural disasters,” Gordon continued. “And, we are also taking a closer look at ‘preppers’—a community that takes preparedness to the extreme.”

Dr. Gordon’s work includes maps of America that breaks down the fears of natural disasters by region, which can be seen at www.chapman.edu/fearsurvey

The remainder of The Chapman Survey on American Fears looks at fear factors.

“Through a complex series of analyses, we were able to determine what types of people tend to fear certain things, and what personal characteristics tend to be associated with most types of fear,” said Dr. Christopher Bader, who performed the analysis.

Through their analysis two key factors emerged: having a lower level of education and also high frequency of television viewing were the most consistent predictors of fear. A comprehensive list of the top fears from The Chapman Survey on American Fears can be found www.chapman.edu/fearsurvey. The researchers at Chapman University plan to make this an annual endeavor so they may track trends over time. In addition to Bader, Day and Gordon, student involvement was key in helping throughout the process.