New York City professes to be tolerant, diverse and outcome-oriented in many ways - education for elites is not among them. 6 percent of 8th graders will get to go to one of 8 specialized elite schools, based on test scores and all of the racial, social and income inequality that perpetuates.

Though New York City will happily ban Big Gulps and trans fats because they care about the poor and minorities, they rationalize why it is a meritocracy that female, black and Latino students are woefully underrepresented. Not all of them are underrepresented equally. The Bronx High School of Science is only 58 percent male, and only 23 percent white. It is Asians who dominate there, with 63 percent. High School of American Studies at Lehman College, though, more liberal arts oriented, is 70 percent white.

But what if the admissions policies were changed to be more progressive and less attached to 1920s thinking? A new report from the Research Alliance for New York City Schools simulated the effects of various admissions criteria that have been proposed as alternatives to the current policy - which uses students' performance on the Specialized High School Admissions Test (SHSAT) as the sole determinant of admission. 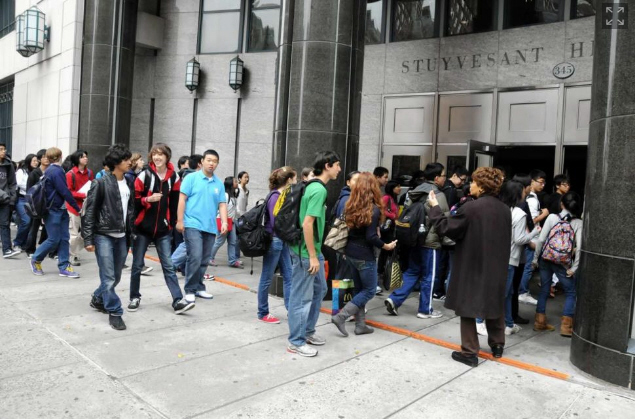 The study found that admissions rules based on criteria other than the SHSAT - including state test scores, grades, and attendance - would moderately alter the demographic mix of the specialized schools without significantly lowering the academic achievement levels of incoming students. But the rules would not substantially improve the schools' diversity, particularly for Black students, whose numbers would actually decrease under several of the proposed rules.

"While there is a clear pattern of unequal access at the specialized schools, our findings suggest that a narrow focus on the SHSAT is unlikely to solve the problem," said Sean Corcoran, associate professor of educational economics at NYU's Steinhardt School of Culture, Education, and Human Development and the report's author. "Unfortunately, the disparities at these schools are symptomatic of larger, system-wide achievement gaps."

Many students--including many high-achieving students--do not take the SHSAT at all, and some of those offered admission decide to go to high school elsewhere.

Even when comparing students with the same level of prior academic achievement (based on seventh grade New York State English language arts and math tests), the researchers documented disparities at each stage of the pathway into a specialized school:

"Our analysis suggests there is room to increase the number of well-qualified students who successfully navigate the pathway into a specialized school," said Corcoran. "Strategies that encourage top students to take the test, for example, or provide high-quality SHSAT preparation hold promise for improving access."

This suggests that the concentration of offers in a small number of middle schools is less about the schools themselves and more about the uneven distribution of students across the system--that is, the sorting of higher- and lower-achieving students that takes place before they get to middle school.

Critics of SHSAT-only admissions have offered ideas for different admissions criteria, and selective high schools in other cities use a variety of rules to admit students. But little information exists about how proposed changes would affect New York's specialized high schools. To address this, Corcoran and Baker-Smith simulated what would happen if new admissions criteria were in place, in lieu of the SHSAT. Key findings include:

"The real take-away here is that the lack of diversity in the specialized schools is a much bigger problem than 'to test or not to test?'" said James Kemple, the Research Alliance's executive director. "We need to think more broadly about how to reduce inequality in New York City's schools - identifying strategies that create opportunities for traditionally disadvantaged students will be a primary focus of the Research Alliance's work in coming years."