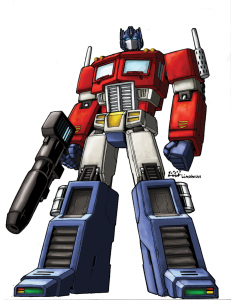 According to a new paper, there is more than meets the eye when it comes to the impact of Saturday morning cartoons, in particular the popular 1980s cartoon series "The Transformers", and what it did to shape children's perceptions of what behaviors are associated with effective leadership.

"The Transformers" started in 1984 with a toy line of transforming factions of alien robots fighting a civil war that spread to Earth -- the "good" Autobots, seeking peace, and the "bad" Decepticons, vying for galactic domination. The franchise has grown to include animation, comic books, video games and films, grossing more than $1 billion, whereas their competitors at the time, the Go-Bots, have been left behind.

It may come down to leadership - Optimus Prime was just better at getting the job done - and the valuables lessons it taught then may be making a difference in the leaders off today that the show inspired.

The 3 key lessons are are:

1) flatter groups are more successful -- sharing power is more valuable than trying to use power for the selfish benefit of oneself;

2) in general, leaders tend to be exceptional people; and finally,

3) intelligence (cognitive ability and skill) is a particularly important attribute for a leader to have. These messages align well with the current academic literature about what kinds of individuals emerge as leaders and what it takes to be effective as a leader.

"The Transformers' characters and the stories told in the cartoon are a modern example of traditional folklore as a means of educating individuals about leadership," said University of Nebraska-Lincoln's Peter Harms, who co-authored the research. "And, as examples go, one that is particularly relevant since the generation that watched them and were exposed to the toys are in their mid-30s to early-40s. They are the decision makers of today and the immediate future."

For the project, Harms and Binghamton University's Seth Spain rated the leadership skills of more than 120 characters featured in the first two years of The Transformers cartoon (1984-1985) and the 1986 film The Transformers: The Movie. The individual leadership ratings were developed using "Bio and Tech Specs" profiles printed on the back of Transformers toy packages.

Categories within the package profiles included intelligence, skill, courage, strength, endurance, speed and firepower. They learned that, for both factions, the single most important factor that determined an individual's place in the leadership hierarchy was intelligence. Harms said the profiles, which were developed by toy company marketing teams, are a reflection of how people make sense of the modern workplace.

While the Decepticons often have an advantage in each story, Megatron's plans are undermined by the incompetence and disloyalty of his followers. On the other side, while the Autobots are portrayed at a disadvantage, they ultimately triumph based on the loyalty and initiative of their leadership and followers.

"While simple, those kinds of lessons can be useful when carried into the business world," Harms said. "Moral lessons in The Transformers and other fiction for children have played some role in shaping our understanding of how organizations should function and our perceptions of how the leader-follower dynamics should operate."

"We also draw on lessons from The Iliad, Thomas the Tank Engine, The Smurfs -- Spider-Man shows up in this briefly to try to show how we use stories to communicate values and schemas, or norms, about leadership," Spain said.

The study, "Children's Stories as a Foundation for Leadership Schemas: More than Meets the Eye," will roll out in Emerald Group Publishing's book series, Monographs in Leadership and Management to be published in spring 2016. Top image credit: Hasbro