News Staff
With generous government subsidies and a 'green' halo, wind power is enjoying a lot of financial windfalls. Meanwhile, since being gutted by the Clinton administration in 1993, nuclear energy has been blocked so that it is increasingly less viable.

For that reason, activists thought Sweden would be a good target for their efforts, because they love to tout their lack of emissions. Yet the Swedes would end up with more emissions if they added wind, according to a new paper.

The Swedish power supply is mainly based on a combination of hydroelectric and nuclear power combined with power exchange with neighboring Scandinavian countries. A study investigated the possibility of replacing nuclear power with wind power and found that because it is intermittent, a constant rate of consumption would necessitate a backup system, based on fossil fuel, namely gas. 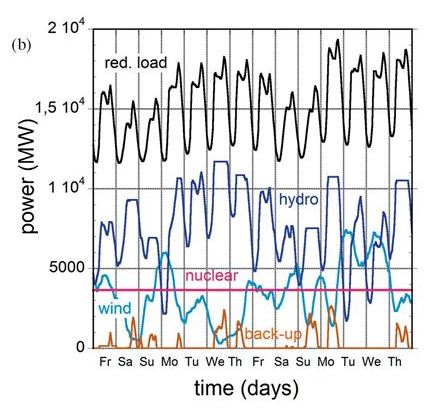 The reduced load along with the original nuclear power, the contribution of which is halved. It also shows the increased contribution from wind necessary and that from a backup system.

In such a scenario, the CO2 emissions would double, according to Fritz Wagner from the Max Planck Institute for Plasmaphysics, Greifswald, Germany, and Elisabeth Rachlew from the Royal Institute of Technology, Stockholm, Sweden.

The study is based on data from 2013 pertaining to the load and the various power supply sources in Sweden. To represent constantly available wind power, the original 2013 data has been corrected for the increase in wind power during the year. The authors investigate the extent to which the required capacity of the installed wind power together with hydroelectricity reduce the nuclear share of their overall power generation. They also look into whether a backup system is necessary and at what power capacity.

Going a step further, they also examine the dynamics of its operation to determine the type of system required for back-up. In addition, they analyze the amount of surplus produced when the wind contribution is in excess of the reduced load, and whether the surplus energy can be stored to supplement the back-up power supply. Finally, they look at whether the operational conditions for hydroelectricity are acceptable.

They conclude that this scenario would double the specific CO2 emissions, which would not make sense on any level.