Some people have the appearance of a young shape even as they age. Good genes and clean living, it is said. But the nature and nurture argument has a new companion - historical context - at least in sociology.

A new study claims evidence that the role of genetics in complex traits, including obesity, varies over time. Both the era in which scientific research is conducted and the era in which subjects were born may have an impact on the degree to which genetic factors are present in scientific data.

"I liken it to a kind of uncertainty principle, or 'observer effect,' for genetics," said Nicholas Christakis, a Yale professor of sociology, ecology&evolutionary biology, and medicine, and co-author of the study. "In principle, any study of how DNA affects bodily outcomes may thus be finding effects that are not ever-enduring, or may be missing effects that -- but for the timing of the research -- are enduring." 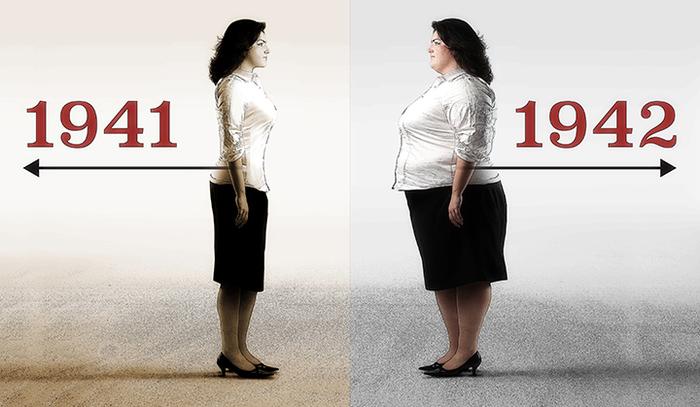 A new study shows that the role of genetics in complex traits, including obesity, varies over time. Credit: Michael Helfenbein

Christakis and his colleagues focused on a specific genetic variant in the FTO gene that is widely known to be associated with obesity. Looking at data from the Framingham Heart Study, they found a difference among people with the FTO gene, depending on their era of birth. People born before 1942 did not display an association between the risk variant and obesity; people born after 1942 showed an even stronger association than had been previously reported.

Researchers attribute the difference to changing societal or environmental conditions that had an effect on whether genetic factors came into play. "It suggests that even more caution and humility in modern genetics research is warranted," Christakis said. "It also suggests that if large-scale genetic association studies with this gene had been conducted a generation earlier, they could have had different results."

The implications for the findings stretch throughout the study of genetics and speak to the complex, evolving bond between heredity and environment, researchers indicated. Examining phenomena such as the rise in obesity, they said, becomes a matter of "disentangling" the strands of historical and contemporary environmental factors that interact with genetic features over time.

"This idea of looking at epoch of birth as it relates to determining genetic risk is not a dimension people are used to thinking about," said Massachusetts General Hospital psychiatrist Niels Rosenquist, co-author of the study. "It's rare to see, in a human population, a changing response to environmental conditions, based on your genotype."

As scientists probe further into such gene-by-birth-cohort and gene-by-environment interactions, Rosenquist and Christakis said it ultimately may be important for researchers to choose broad populations from many types of environments when studying the ways genes are expressed.

"Our paper shows that discovering the effect of genes may depend on the total, historical environment in which the researcher and subject are embedded," Christakis said.