News Staff
More than 15 million miles of new roads will be built worldwide by 2050, pushing back the frontiers of progress. Of course, progress may mean a loss of wilderness if it is not managed carefully, and authors have created a ‘global roadmap’ for prioritizing road building across the planet, to try to balance the competing demands of development and environmental protection.

The authors have created a ‘large-scale zoning plan’ that aims to maximize the benefits for human development while limiting the environmental costs of road expansion. Their map has two components: an ‘environmental-values’ layer that estimates that natural importance of ecosystems and a ‘road-benefits’ layer that estimates the potential for increased agriculture production via new or improved roads.

By combining these layers, they have identified areas where new roads have most potential benefit, areas where road building should be avoided, and conflict areas “where potential costs and benefits are both sizable”. 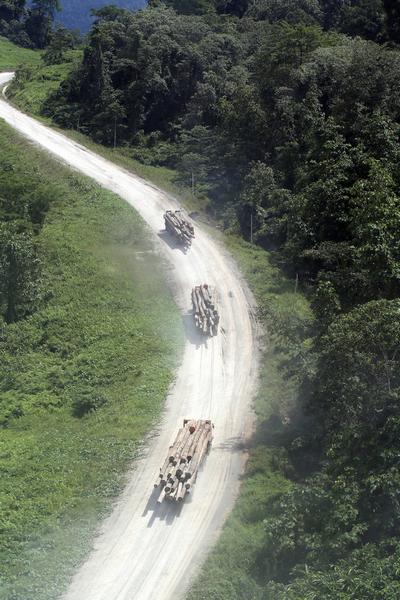 A caravan of logging trucks along a forest road in Sabah, Malaysian Borneo. Photo by Rhett Butler.

“It’s challenging but we think we’ve identified where in the world new roads would be most environmentally damaging,” said co-author Professor Andrew Balmford from the University of Cambridge’s Department of Zoology. “For particular regions the approach can be improved by adding detailed local information but we think our overall framework is a powerful one.”

“Roads often open a Pandora’s Box of environmental problems,” said Professor William Laurance of James Cook University in Australia, the study’s lead author. “But we also need roads for our societies and economies, so the challenge is to decide where to put new roads - and where to avoid them.”

After mapping out the priority areas for conservation, the team looked at where roads would have the greatest benefits for humanity.

In general, areas that would benefit most from new roads are those that have largely converted to agriculture but are currently relatively low-yielding but not too distant from urban markets. All continents have regions that fit this bill - including parts of central Eurasia, Central America and Mexico, and the Atlantic region of South America.

“We focused on agriculture because global food demand is expected to double by mid-century, and new or improved roads are vital for farmers,” said Dr. Gopalasamy Reuben Clements from James Cook. “With better roads, farmers can buy fertilizers to raise their yields and get their crops to markets with far less cost and waste.”

“The good news is that there are still expanses of the world where agriculture can be greatly improved without large environmental costs,” said Dr. Nathan Mueller of Harvard University, USA.

Areas with carbon-rich ecosystems with key wilderness habitats, such as tropical forests, were identified as those where new roads would cause the most environmental damage with the lease human benefit, particularly areas where few roads currently exist.

“Our study also shows that in large parts of the world, such as the Amazon, Southeast Asia, and Madagascar, the environmental costs of road expansion are massive,” said Christine O’Connell from the University of Minnesota.

The authors emphasize that there will be serious conflicts in the coming decades.

“We’re facing a lot of tough decisions,” said Irene Burgues Arrea of the Conservation Strategy Fund in Costa Rica. “For instance, there are huge conflict areas in sub-Saharan Africa, because it has vital wildlife habitats but a very rapidly growing human population that will need more food and more roads.”

The study’s authors say that this new global road-mapping scheme can be used as a working model that can be adapted to for specific areas. They say that proactive and strategic planning to reduce environmental damage should be central to any discussion about road expansion.

“We hope our scheme will be adopted by governments and international funding agencies, to help balance development and nature conservation,” said Laurance. “So much road expansion today is unplanned or chaotic, and we badly need a more proactive approach. It’s vital because we’re facing the most explosive era of road expansion in human history.”

Given that the total length of new roads anticipated by mid-century would encircle the Earth more than 600 times, the authors point out that there is “little time to lose”.