A powerful collision of galaxy clusters has been captured with NASA's Chandra X-ray Observatory and Hubble Space Telescope. Like its famous cousin, the so-called Bullet Cluster, this clash of clusters provides striking evidence for dark matter and insight into its properties.

Like the Bullet Cluster, this newly studied cluster, officially known as MACSJ0025.4-1222, shows a clear separation between dark and ordinary matter. This helps answer a crucial question about whether dark matter interacts with itself in ways other than via gravitational forces. 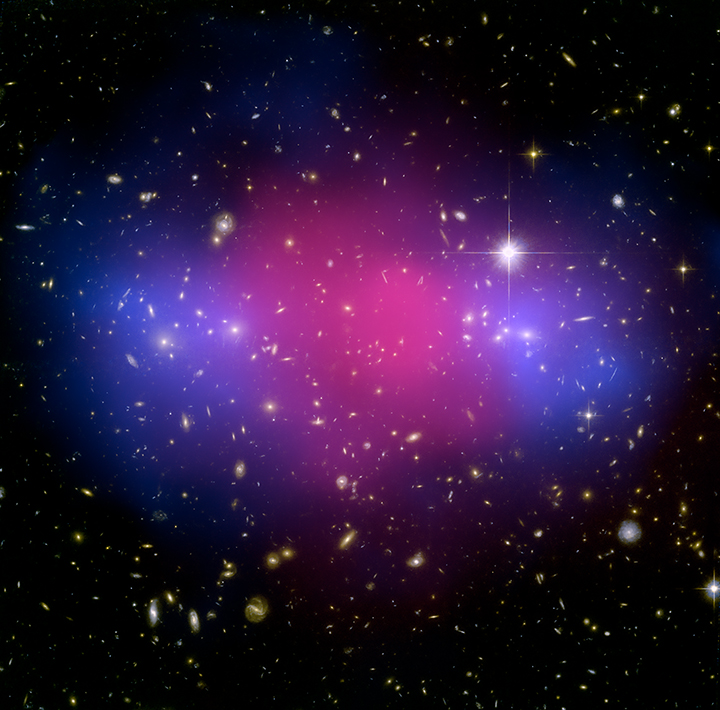 Just like the original Bullet Cluster, MACSJ0025 formed after an incredibly energetic collision between two large clusters in almost the plane of the sky. In some ways, MACSJ0025 can be thought of as a prequel to the Bullet Cluster. At its much larger distance of 5.7 billion light years, astronomers are witnessing a collision that occurred long before the Bullet Cluster's.

Using optical images from Hubble, the team was able to infer the distribution of the total mass (colored in blue) -- dark and ordinary matter -- using a technique known as gravitational lensing. The Chandra data enabled the astronomers to accurately map the position of the ordinary matter, mostly in the form of hot gas, which glows brightly in X-rays (pink).

An important difference between the Bullet Cluster and the new system is that MACSJ0025 does not actually contain a "bullet". This feature is a dense, X-ray bright core of gas that can be seen moving through the Bullet Cluster. Nonetheless, the amount of energy involved in this mammoth collision is nearly as extreme as that found in the Bullet Cluster.

As the two clusters that formed MACSJ0025 (each almost a whopping million billion times the mass of the Sun) merged at speeds of millions of miles per hour, the hot gas in each cluster collided and slowed down, but the dark matter did not. The separation between the material shown in pink and blue therefore provides direct evidence for dark matter and supports the view that dark matter particles interact with each other only very weakly or not at all, apart from the pull of gravity.

This animation shows a galaxy cluster, the largest gravitationally-bound objects in the Universe. Two of these mammoth objects collided to create the system that astronomers call MACS J0025.4-1222. Individual galaxies are shown in white and yellow, and the intergalactic gas is shown in red. Galaxy clusters contain as much mass as a million billion suns. The strong gravitational pull of this matter squeezes the gas and heats it to about 100 million degrees, making it only detectable in X-rays.

One of the great accomplishments of modern astronomy has been to establish a complete inventory of the matter and energy content of the Universe. The so-called dark matter makes up approximately 23% of this content, five times more than the ordinary matter that can be detected by telescopes. The latest results with MACSJ0025 once again confirm these findings.

The international team of astronomers in this study was led by Marusa Bradac of the University of California Santa Barbara (UCSB), and Steve Allen of the Kavli Institute for Particle Astrophysics and Cosmology at Stanford and SLAC. Other collaborators included Tommaso Treu (UCSB), Harald Ebeling (University of Hawaii), Richard Massey (Royal Observatory Edinburgh), and R. Glenn Morris, Anja von der Linden, and Douglas Applegate (KIPAC). Their results will appear in an upcoming issue of The Astrophysical Journal.