Engineers from NASA and Pratt & Whitney Rocketdyne successfully completed a series of hot-fire altitude tests using liquid methane on the RS-18 engine, which was last used to lift astronauts off the moon's surface 36 years ago and was originally flown with storable hypergolic propellants during the Apollo moon missions.

The tests, conducted at White Sands test facility in New Mexico, are part of the technology development for NASA's Constellation program, and gathered important data on ignition, performance measurement, and rapid start and stop.

The RS-18 engine has been modified to burn liquid oxygen and liquid methane, providing increased safety and performance to future space vehicles. 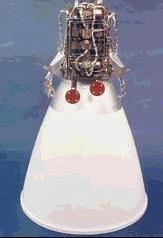 "We're extremely proud to be part of this history-making milestone," said Terry Lorier, RS-18 program manager, Pratt & Whitney Rocketdyne. "It's tremendously gratifying to know our engine technology is being tested for the NASA Constellation Program. We literally pulled an engine off the museum shelf and were the first to prove that liquid methane could be used on hardware previously rated for storable propellants."

These propulsion systems would have higher performance than current storable propellant systems and may have the potential to use reactants mined from lunar and Martian environments.