University of Florida mechanical and aerospace engineering associate professor Subrata Roy has submitted a patent application for a circular, spinning aircraft design reminiscent of the spaceships seen in countless Hollywood films. Roy, however, calls his design a “wingless electromagnetic air vehicle,” or WEAV.

The proposed prototype is small – the aircraft will measure less than six inches across – and will be efficient enough to be powered by on-board batteries.

Roy said the design can be scaled up and theoretically should work in a much larger form. Even in miniature, though, the design has many uses. 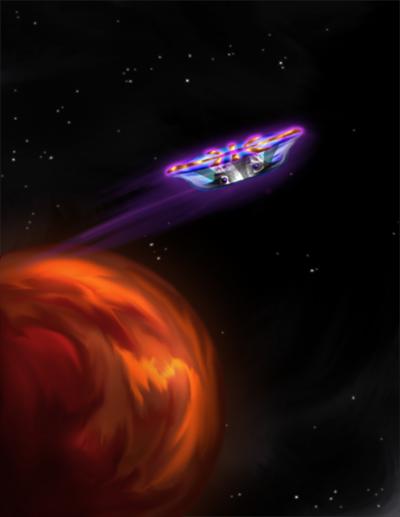 Artist’s illustration of what a wingless electromagnetic air vehicle might look like as it flies in the atmosphere above Mars. Credit: Danielle Zawoy for the University of Florida.

The most obvious functions would be surveillance and navigation. The aircraft could be designed to carry a camera and light and be controlled remotely at great distances, he said.

Fittingly, Roy said his flying saucer one day could soar through atmospheres other than Earth’s own. For example, the aircraft would be an ideal vehicle for the exploration of Titan, Saturn’s sixth moon, which has high air density and low gravity, Roy said.

The U.S. Air Force and NASA have expressed interest in the aircraft, and the university is seeking to license the design, he said.

“This is a very novel concept, and if it’s successful, it will be revolutionary,” Roy said.

The vehicle will be powered by a phenomenon called magnetohydrodynamics, or the force created when a current or a magnetic field is passed through a conducting fluid. In the case of Roy’s aircraft, the conducting fluid will be created by electrodes that cover each of the vehicle’s surfaces and ionize the surrounding air into plasma.

The force created by passing an electrical current through this plasma pushes around the surrounding air, and that swirling air creates lift and momentum and provides stability against wind gusts. In order to maximize the area of contact between air and vehicle, Roy’s design is partially hollow and continuously curved, like an electromagnetic flying bundt pan.

One of the most revolutionary aspects of Roy’s use of magnetohydrodynamics is that the vehicle will have no moving parts. The lack of traditional mechanical aircraft parts, such as propellers or jet engines, should provide tremendous reliability, Roy said. Such a design also will allow the WEAV to hover and take off vertically.

Though the design is promising on paper, towering obstacles stand between the blueprint and liftoff.

No plasma-propelled aircraft has successfully taken flight on Earth. Such designs have found some success in space, where gravity and drag are minimal, but a vehicle hoping to fly within Earth’s atmosphere will need at least an order of magnitude more thrust, Roy said.

Also, the power source needs to be extremely lightweight yet still produce enough power to generate the necessary plasma. Not to mention the fact that the very same plasma that will allow the aircraft to fly also will interfere with electromagnetic waves necessary for communication with the vehicle.

But Roy is confident that the unique nature of his design will allow it to clear the technological hurdles and take to the skies, and he’s not deterred by the risk of failure.

“Of course the risk is huge, but so is the payoff,” he said. “If successful, we will have an aircraft, a saucer and a helicopter all in one embodiment.”

The propulsion system for Roy’s saucer sprouts from his extensive U.S. Air Force-funded plasma actuator research, the results of which have appeared in more than 15 scholarly journals.