A Primitive, Non-Photosynthesizing Microbe Still Had The Precursor Of Photosynthesis
By News Staff | January 31st 2017 10:50 AM | Print | E-mail

News Staff
A primitive, non-photosynthesizing microbe, Methanospirillum hungatei, which is thought to have existed since before the development of photosynthesis, possess genes similar to those that play a role in photosynthesis, finds a new study.

Photosynthesis, creating oxygen and carbohydrates such as glucose from solar energy, water, and CO2, is indispensable for many species on this planet. However, it is unclear exactly how or when organisms evolved the ability to photosynthesize. A team has discovered an evolutionary model for the biological function that creates CO2 from glucose in photosynthesis.

Through analysis of the enzymes synthesized by these genes and by investigating the metabolic substances within the organism, carrying out metabolome analysis to locate the trapped CO2, the team proved that Methanospirillum hungatei uses a primitive pathway that closely resembles the metabolic pathway used in photosynthesis to synthesize carbohydrates such as glucose. 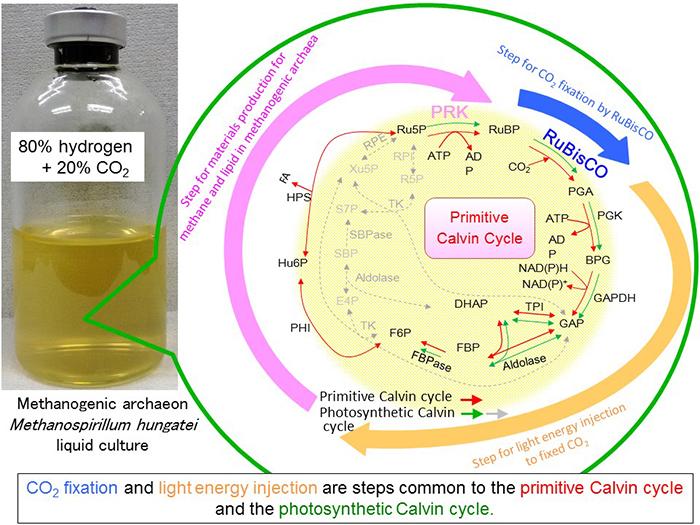 By clarifying part of the primitive metabolic pathway for photosynthesis, these findings could help to reveal how the photosynthesis system formed during evolution, a mystery that scientists have so far been unable to solve. If further light can be shed on the evolution of photosynthesis, scientists could potentially utilize this information to use and improve upon photosynthetic functions in order to increase production of crops and biofuel.