A recent study finds that chewing gum laced with a plant-grown protein named ACE2 serves as a “trap” for the SARS-CoV-2 virus, reducing viral load in saliva and potentially tamping down transmission.

Vaccinations for COVID-19 have begun to stamp out the pandemic but even people who are fully vaccinated can still become infected with SARS-CoV-2. Scientists are on the hunt for new ways to neutralize the virus before it can harm people with co-morbidities.

“SARS-CoV-2 replicates in the salivary glands, and we know that when someone who is infected sneezes, coughs, or speaks some of that virus can be expelled and reach others,” says Henry Daniell at Penn’s School of Dental Medicine. “This gum offers an opportunity to neutralize the virus in the saliva, giving us a simple way to possibly cut down on a source of disease transmission.” 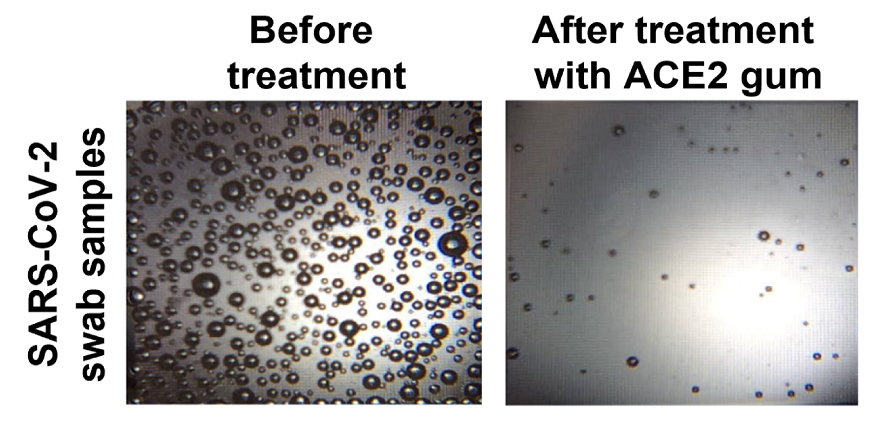 In a measure of viral load using microbubbles, the chewing gum infused with the ACE2 protein triggered a reduction in the amount of virus in samples taken from COVID-19 patients. (Image: Courtesy of the researchers)

Prior to the pandemic, Daniell had been studying the angiotensin-converting enzyme 2 (ACE2) protein in the context of treating hypertension. His lab had grown this protein, as well as many others that may have therapeutic potential, using a patented plant-based production system. By bombarding plant material with the DNA of target proteins, they coax plant chloroplasts to take up the DNA and begin growing the proteins. The plant material, freeze-dried and ground-up, could be used as a means of delivering the protein. This system has the potential to avoid the usual obstacles to protein drug synthesis: namely, an expensive production and purification process.

Daniell’s past work on ACE2 proved fortuitous in the context of the COVID-19 pandemic. The receptor for ACE2 on human cells also happens to bind the SARS-CoV-2 spike protein. Other research groups have shown that injections of ACE2 can reduce viral load in people with severe infections.

Meanwhile, another line of work by Daniell and Penn Dental Medicine colleague Hyun (Michel) Koo has involved research to develop a chewing gum infused with plant-grown proteins to disrupt dental plaque. Pairing his insights about ACE2 with this technology, Daniell wondered if such a gum, infused with plant-grown ACE2 proteins, could neutralize SARS-CoV-2 in the oral cavity.

To find out, he reached out to Ronald Collman at Penn Medicine, a virologist and pulmonary and critical care doctor whose team, since the early stages of the pandemic, had been collecting blood, nasal swabs, saliva, and other biospecimens from COVID patients for scientific research.

“Henry contacted me and asked if we had samples to test his approach, what kind of samples would be appropriate to test, and whether we could internally validate the level of SARS-CoV-2 virus in the saliva samples,” Collman says. “That led to a cross-school collaboration building on our microbiome studies.”

To test the chewing gum, the team grew ACE2 in plants, paired with another compound that enables the protein to cross mucosal barriers and facilitates binding, and incorporated the resulting plant material into cinnamon-flavored gum tablets. Incubating samples obtained from nasopharyngeal swabs from COVID-positive patients with the gum, they showed that the ACE2 present could neutralize SARS-CoV-2 viruses.

Those initial investigations were followed by others at The Wistar Institute and Penn Vet, in which viruses, less-pathogenic than SARS-CoV-2, were modified to express the SARS-CoV-2 spike protein. The scientists observed that the gum largely prevented the viruses or viral particles from entering cells, either by blocking the ACE2 receptor on the cells or by binding directly to the spike protein.

Finally, the team exposed saliva samples from COVID-19 patients to the ACE2 gum and found that levels of viral RNA fell so dramatically to be almost undetectable.

The research team is currently working toward obtaining permission to conduct a clinical trial to evaluate whether the approach is safe and effective when tested in people infected with SARS-CoV-2 .

“Henry’s approach of making the proteins in plants and using them orally is inexpensive, hopefully scalable; it really is clever,” Collman says. 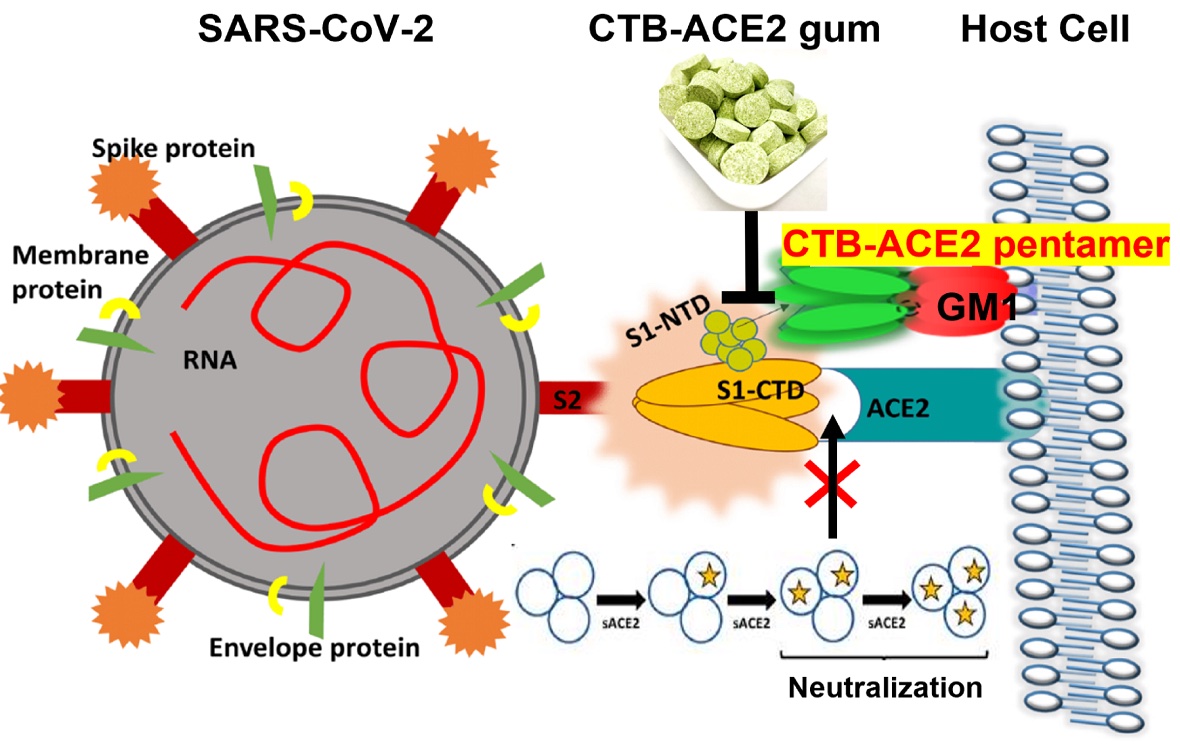 Penn Dental Medicine’s Henry Daniell and colleagues used a plant-based protein drug production platform to grow the ACE2 protein, which was then infused in chewing gum. By either blocking the ACE2 receptor or binding to the SARS-CoV-2 spike protein, the ACE2 in the gum appears to be able to reduce viral entry into cells. (Image: Courtesy of the researchers)

Though the research is still in early stages of development, if the clinical trials prove the gum is safe and effective, it could be given to patients whose infection status is unknown or even for a dental check-ups when masks must be removed, to reduce the likelihood of passing the virus to caregivers.

“We are already using masks and other physical barriers to reduce the chance of transmission,” says Daniell. “This gum could be used as an additional tool in that fight.”