After 3 Years Of Maintenance, The Large Hadron Collider Is Getting Back Into Collision Shape
By News Staff | April 21st 2022 11:06 AM | Print | E-mail

News Staff
The world’s largest particle accelerator is back in business. Today, two beams of protons circulated in opposite directions around the Large Hadron Collider’s 27-kilometer ring at their injection energy of 450 billion electronvolts (450 GeV), marking the conclusion of a three year hiatus for maintenance, consolidation and upgrade work.

The work was done so that it can operate at an even higher energy and deliver significantly more data to the upgraded LHC experiments but high-energy collisions still months away. The beams circulated today were a test at injection energy and contained a small number of protons.

They will progressively recommission the machine and safely ramp up the energy and intensity of the beams before delivering collisions to the experiments at a record energy of 13.6 trillion electronvolts (13.6 TeV) and that will set off four years of physics-data taking. 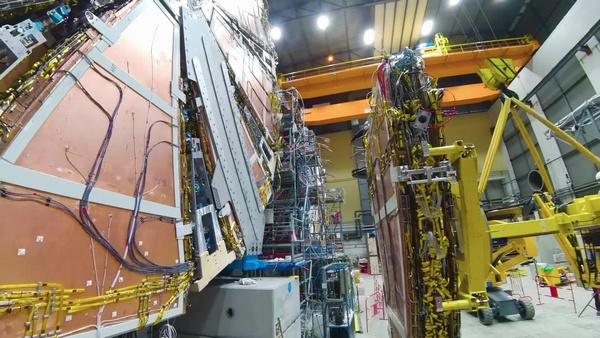 Upgrade work carried out on the LHC large detectors (ATLAS, CMS, ALICE and LHCb) during Long Shutdown 2 (LS2) from 2019 to 2022. Credit: CERN

This third run will allow the ATLAS and CMS experiments to receive more collisions than in the two previous physics runs combined. LHCb will see its collision count increase by a factor of three and ALICE, a detector for studying heavy-ion collisions, can expect a 50X increase in the total number of recorded ion collisions.

Other things to look forward to in Run 3 include the operation of two new experiments, FASER and SND@LHC,designed to look for physics beyond the Standard Model; special proton–helium collisions to measure how often the antimatter counterparts of protons are produced in these collisions; and collisions involving oxygen ions that will improve physicists’ knowledge of cosmic-ray physics and the quark–gluon plasma, a state of matter that existed shortly after the Big Bang.
News Articles
More Articles All Articles
About