Ancestors Of Humans Recycled Flint Tools For These Very Specific Purposes
By News Staff | May 29th 2019 09:06 AM | Print | E-mail

News Staff
Ancestors of modern humans "recycled" broken flint tools 400,000 years ago in order to create small, sharp utensils with specific functions in the processing of animal products and plant materials. The results were found in digs at Qesem Cave, located just outside Tel Aviv, which was discovered in 2000 during a road construction project and has since provided insights into life in the region hundreds of thousands of years ago.

In recent years, archaeologists working in caves in Spain and North Africa and digs in Italy and Israel have unearthed evidence that prehistoric people recycled objects they used in daily life. Just as we recycle materials such as paper and plastic to manufacture new items today, early hominids collected discarded or broken tools made of flint to create new utensils for specific purposes hundreds of thousands of years ago.

The recent work detailed specific uses of the recycled 'tool kit' at Qesem Cave. Conditions in the cave allowed for the immaculate preservation of the materials, including micro residue on the surface of the flint tools. Using microscopic and chemical analyses, they found that these small and sharp recycled tools were specifically produced to process animal resources like meat, hide, fat and bones. They also found evidence of plant and tuber processing, which demonstrated that they were also part of the hominids' diet and subsistence strategies. 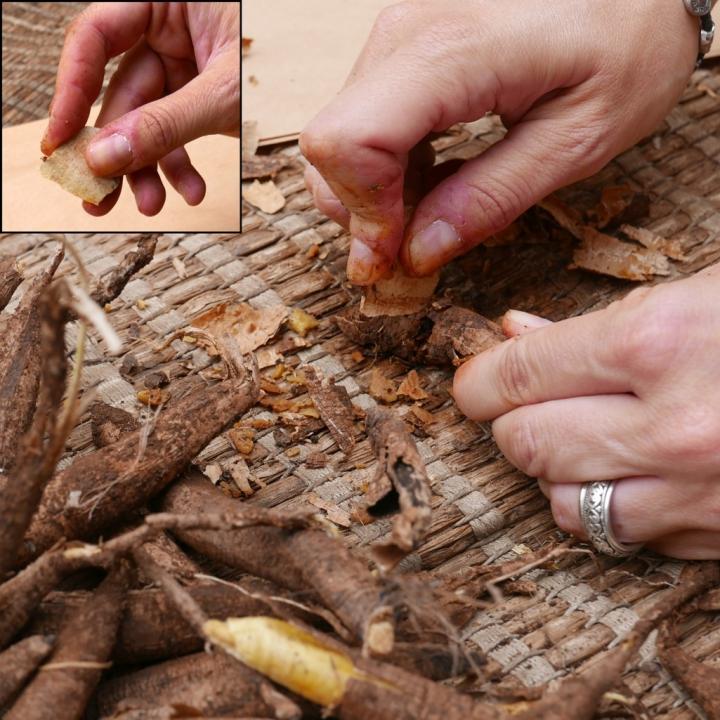 Cutting tubers with a small recycled flake and a close-up of its prehension (inset). Credit:
Flavia Venditti/AFTAU.

According to the study, signs of use were found on the outer edges of the tiny objects, indicating targeted cutting activities related to the consumption of food: butchery activities and tuber, hide and bone processing. The researchers used two different and independent spectroscopic chemical techniques: Fourier transform infrared spectroscopy (FTIR) and scanning electron microscopy coupled with energy dispersive X-ray spectroscopy (SEM-EDX).

They were able to demonstrate that the small recycled flakes were used in tandem with other types of utensils. They therefore constituted a larger, more diversified tool kit in which each tool was designed for specific objectives. It also led them to know that the Qesem inhabitants practiced various activities in different parts of the cave: The fireplace and the area surrounding it were eventually a central area of activity devoted to the consumption of the hunted animal and collected vegetal resources, while the so-called 'shelf area' was used to process animal and vegetal materials to obtain different by-products.

The researchers are continuing to investigate prehistoric recycling by applying their analysis to other sites in Africa, Europe and Asia.
News Articles
More Articles All Articles
About