Are Preschoolers Racist? Only If Learned, But They Notice Skin Color Differences Even Earlier
By News Staff | August 31st 2020 08:21 AM | Print | E-mail

News Staff
With racial tension erupting again, parents may be wondering the appropriate age to discuss what kids see in news accounts or in protests at sporting events.

Psychologists believe that some infants are aware of race and children are capable of thinking about all sorts of complex topics at a very young age. They must, because they see older, bigger people doing things that may seem almost magical, and it becomes important to make sense of their world and so they will come up with their own ideas about how things work. But if they only see news on television, with two sides rioting and committing violence in the name of opposing the others' fascism, the ideas kids come up with may be inaccurate or even detrimental.

If they only learn from various news media and its spin, preschoolers may get their correlation and causation mixed up and develop racist beliefs even if the parents are not teaching them. And according to new results most people think 5 is the earliest it will make sense but a new paper says kids have a handle on it much younger.

An online survey asked 600 participants - over half parents and 40 percent were non-caucasian - about the earliest age at which they would talk with children about race. They were also asked when they thought children first develop behaviors and cognitive abilities relating to race and other social factors. The participants believed conversations about race should begin near a child's fifth birthday even though children may begin to be aware of race when they are infants. 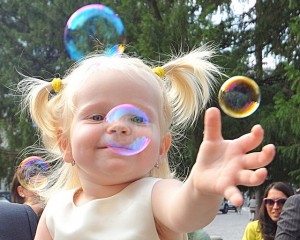 Some psychology papers have claimed that even 3-month-old babies 'prefer' faces from certain racial groups, while 9-month-olds use can distinguish color enough to use race to categorize faces. Some also claim 3-year-old children associate some racial groups with negative traits. By age 4, some papers say that children associate whites with wealth and higher status, and race-based discrimination could be widespread when children start elementary school.

You're right to be skeptical on all of those claims, since America is arguably the least racist country in the world, but kids are passively learning, even if we think they are being quiet. So while parents may not be teaching them, media could be.

Participants who believed children's capacities to process race developed later also believed conversations about race should occur later. The researchers were surprised that the participants' race did not affect the age at which they were willing to talk with children about race. The participants' parental status, gender, education level, or experience with children also didn't have any bearing on the findings.

Another online experiment in the study found that when participants learned about children's developmental abilities relating to race, they said adults should start talking about it when children are 4 years old. This was approximately a year earlier than in the previous experiment.

What psychologists say probably isn't helpful? Platitudes like "Skin color doesn't matter," or "We're all the same on the inside", when in news accounts kids see that skin color clearly does matter. Conversation should begin when parents are comfortable, or certainly before the outside world creates a problem for parents to undo.
News Articles
More Articles All Articles
About