Australopithecus Sediba Lower Back Fossils Are The 'Missing Link' Between Climbing And Walking
By News Staff | November 30th 2021 11:41 AM | Print | E-mail

News Staff
The ancient relative to modern humans Australopithecus sediba walked like a human, but climbed like an ape, filling in a gap in the fossil record long posited by biologists, finds a new analysis.

The recovery of new lumbar vertebrae from the lower back of a single individual of the human relative, Australopithecus sediba, and portions of other vertebrae of the same female from Malapa, South Africa, together with previously discovered vertebrae, form one of the most complete lower backs ever discovered in the early hominid record and give insight into how this ancient human relative walked and climbed.

The fossils of a single individual of and portions of other vertebrae of a female were discovered in 2015 during excavations of a mining trackway running next to the site of Malapa in the Cradle of Humankind World Heritage Site, just northwest of Johannesburg, South Africa. Malapa is the site where, in 2008, Professor Lee Berger from the University of the Witwatersrand and his then nine-year old son, Matthew, discovered the first remains of what would be a new species of ancient human relative named Australopithecus sediba. 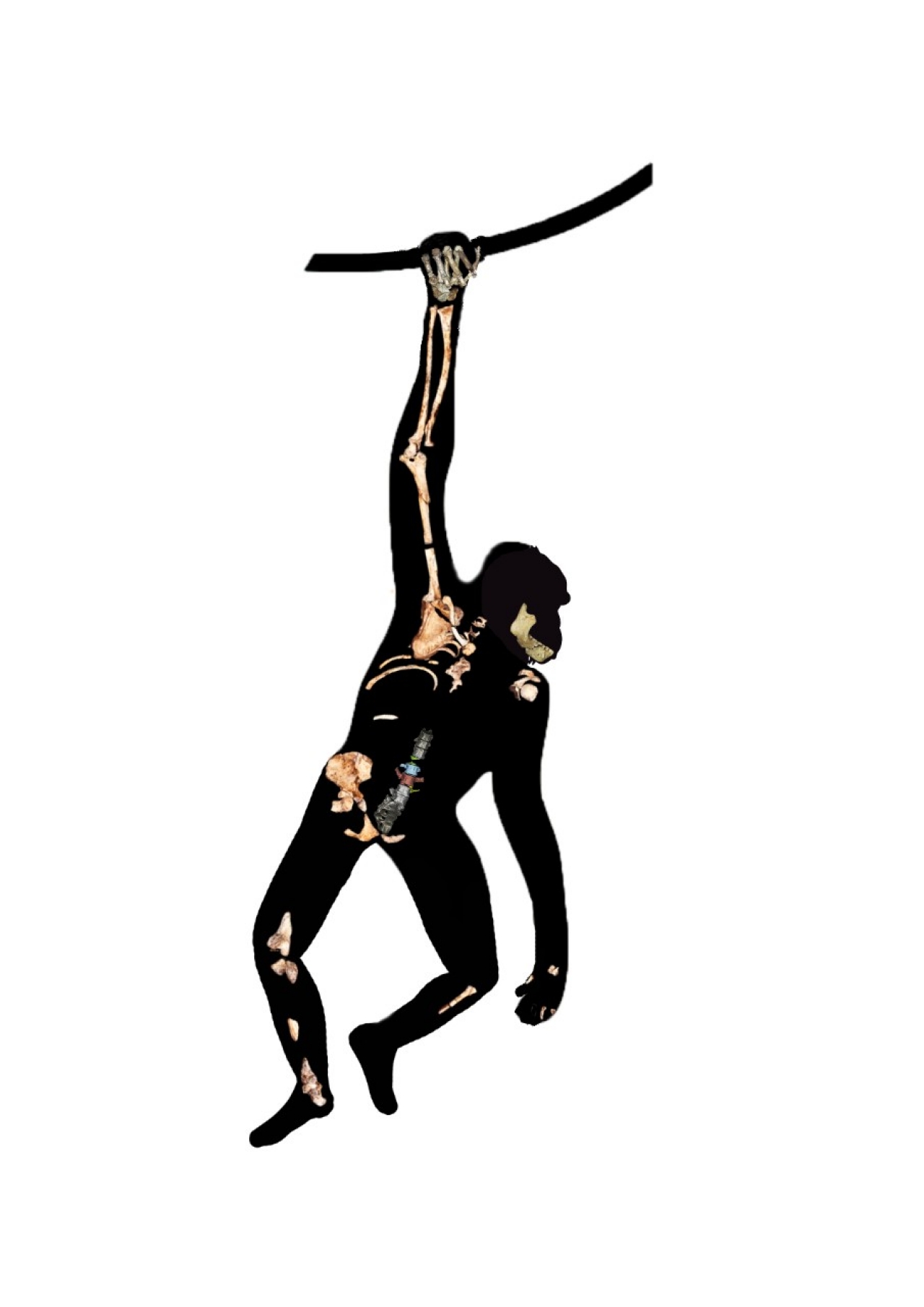 Australopithecus sediba silhouette showing the newly-found vertebrae (colored) along with other skeletal remains from the species. Credit: NYU&Wits University

Fossils from the site have been dated to approximately two million years before present. The vertebrae described in the present study were recovered in a consolidated cement-like rock, known as breccia, in near articulation.

To allow for analysis, the fossils were scanned. Once virtually prepared, the vertebrae were reunited with fossils recovered during earlier work at the site and found to articulate perfectly with the spine of the fossil skeleton, part of the original Type specimens of Australopithecus sediba first described in 2010. The skeleton’s catalogue number is MH 2, but the researchers have nicknamed the female skeleton “Issa,” meaning protector in Swahili. The discovery also established that like humans, sediba had only five lumbar vertebrae.

“The lumbar region is critical to understanding the nature of bipedalism in our earliest ancestors and to understanding how well adapted they were to walking on two legs,” says Professor Scott Williams of New York University and Wits University and lead author on the paper. “Associated series of lumbar vertebrae are extraordinarily rare in the hominin fossil record, with really only three comparable lower spines being known from the whole of the early African record.”

The discovery of the new specimens means that Issa now becomes one of only two early hominin skeletons to preserve both a relatively complete lower spine and dentition from the same individual, allowing certainty as to what species the spine belongs to - previous studies of the incomplete lower spine by authors not involved in the present study hypothesised that sediba would have had a relatively straight spine, without the curvature, or lordosis, typically seen in modern humans. They further hypothesised Issa’s spine was more like that of the extinct species Neandertals and other more primitive species of ancient hominins older than two million years.

Lordosis is the inward curve of the lumbar spine and is typically used to demonstrate strong adaptations to bipedalism.

However, with the more complete spine, and excellent preservation of the fossils, the present study found the lordosis of sediba was in fact more extreme than any other australopithecines yet discovered, and the amount of curvature of the spine observed was only exceeded by that seen in the spine of the 1.6-million-year-old Turkana boy (Homo erectus) from Kenya and some modern humans.
News Articles
More Articles All Articles
About