News Staff
Though the development of agriculture 10,000 years ago is what made humans the apex predator, a new analysis reveals that the stage was set long before farming became science.

Excavations at Border Cave in the Lebombo Mountains, on the border of KwaZulu-Natal Province, South Africa, and Swaziland, show that someone was cooking starchy Hypoxis angustifolia rhizomes plants, such as the Yellow Star flower, 170,000 years ago. It also suggests they probably used wooden sticks to extract plants from the ground.

Hypoxis angustifolia is evergreen, so it has visibility year-round, and since it thrives in a variety of modern habitats today it likely had wide distribution in the past. It is fund from sub-Saharan Africa to the Indian Ocean islands and as far as Yemen, which suggests it was a reliable, familiar food source for early humans trekking within Africa or elsewhere by mobile hunter-gatherers. 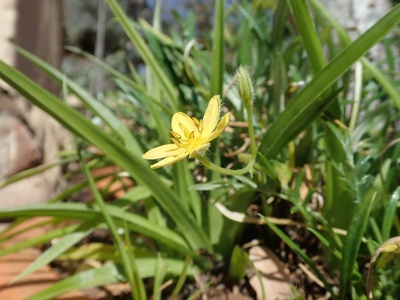 Hypoxis rhizomes are nutritious and carbohydrate-rich with an energy value of approximately 500 KJ/100g. While they are edible raw, the rhizomes are fibrous and have high fracture toughness until they are cooked. The rhizomes are rich in starch and would have been an ideal staple plant food and cooking the rhizomes would have made them easier to peel and to digest so more of them could be consumed and the nutritional benefits would be greater.

A team has been digging there since 2015 and on an excavation recognized the small, charred cylinders as rhizomes. All appear to belong to the same species, and 55 charred, whole rhizomes were identified as Hypoxis, commonly called the Yellow Star flower. The most likely of the species growing in KwaZulu-Natal today is the slender-leafed Hypoxis angustifolia that is favored as food. It has small rhizomes with white flesh that is more palatable than the bitter, orange flesh of rhizomes from the better known medicinal Hypoxis species often called the African Potato.

The Border Cave plant identifications were made on the size and shape of the rhizomes and on the vascular structure examined under a scanning electron microscope. Modern Hypoxis rhizomes and their ancient counterparts have similar cellular structures and the same inclusions of microscopic crystal bundles, called raphides. The features are still recognizable even in the charred specimens. Over a four-year period, the team made a collection of modern rhizomes and geophytes from the Lebombo area, to compare those to the ancient charred specimens.

"The discovery also implies the use of wooden digging sticks to extract the rhizomes from the ground. One of these tools was found at Border Cave and is directly dated at circa 40,000 years ago," says co-author of the paper and co-director of the excavation, Professor Francesco d'Errico, (Centre National de la Recherche Scientifique (CNRS), Université de Bordeaux, France and University of Bergen, Norway). Dr Lucinda Backwell (Instituto Superior de Estudios Sociales, ISES-CONICET, Tucumán, Argentina) also co-authored the paper and was a co-director of the excavation.

The Hypoxis rhizomes were mostly recovered from fireplaces and ash dumps rather than from surrounding sediment. Logically, that means the Border Cave inhabitants would have dug Hypoxis rhizomes from the hillside near the cave and carried them back to the cave to cook them in the ashes of fireplaces. The fact that they were brought back to the cave rather than cooked in the field suggests that food was shared at the home base. This suggests that the rhizomes were roasted in ashes and that, in the process, some were lost, but the evidence for cooking is circumstantial. Still, it is enough to be compelling.
News Articles
More Articles All Articles
About