Cancer Is The Leading Cause Of Death In High-Income Countries, And That's A Public Health Win
By News Staff | September 5th 2019 10:00 AM | Print | E-mail

News Staff
Two statistical analyses looked at common disease incidence, hospitalization and death, plus modifiable cardiovascular risk factors in middle-aged adults across 21 High-Income, Middle-Income, and Low-Income Countries and found that cancer is now the leading cause of death in wealthier countries.

That's a good thing. It means cardiovascular deaths are in decline, which means greater longevity. The number one risk factor for cancer is instead age.

The Prospective Urban and Rural Epidemiologic (PURE) study is the only large prospective international cohort study that involves substantial data from a large number of countries across income levels, and employs standardized and concurrent methods of sampling, measurement and follow-up.

It found that cancer, pneumonia, COPD and injuries to each be most common causes of death in wealthier countries, and those are all increased risks with age, while in low income countries it is still cardiovascular diseases killing people, which means younger.

Overall mortality rates in low income countries were four times that of high income ones, even though rates of deaths from cancer were similar across all country income levels.

So cancer rates stayed the same in high income countries but now cause twice as many deaths as heart attacks and stroke; those are in free fall. That is a public health win, especially since most cancers (smoking, obesity and alcoholism aside) are not related to lifestyles, they are mutations or genetic predisposition and we roll the dice every day.

Most cardiovascular deaths are lifestyle modifiable so early mortality is preventable. Wealthier countries have done it, and eventually so will poorer ones. 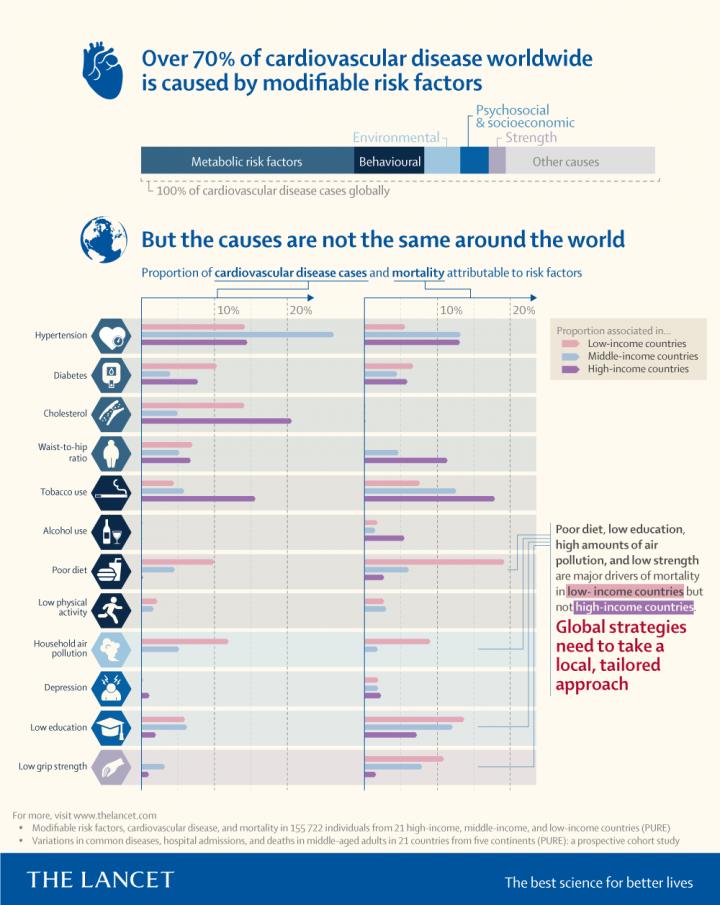 Over 70% of cardiovascular disease worldwide is caused by modifiable risk factors. Credit: The Lancet

That also means as smoking, alcoholism, and obesity decline cancer will follow cardiovascular disease into lower numbers. If people get cancer, it will likely be bad luck, though Harvard School of Public Health will continue to create rows and columns of foods and disease and suggest causation.

Vegetarian diets won't save people or the planet

That means the risk factors that our National Institutes of Environmental Health Sciences and Ramazinni Institute and International Agency for Research on Cancer statistically tout as being the harms of the modern era (trace chemicals, food, energy, medicine) are not translating into real-world results. Instead of being perilous, modern health care and world-class pharmaceutical research is keeping people alive so long they eventually get cancer.

If the entire world follows suit and cancer becomes the leading cause of death, it will still only be impacting 26 percent of the public no matter how long we age. That is a public health victory.
News Articles
More Articles All Articles
About