Charles Darwin Was Right On Why Insects Are Losing The Ability To Fly, Finds New Paper
By News Staff | December 12th 2020 10:29 AM | Print | E-mail

News Staff
Charles Darwin and many others knew about the wing loss habit of island insects and debated famed botanist Joseph Hooker as to why. Darwin's position was simple that an insect on an island that flies is at more risk of being blown out to sea. Those left on land to produce the next generation are those most reluctant to fly, and eventually evolution follows behavior.

Hooker felt that was more Lamarckian than evolution, the same look elsewhere effect that plagues epigenetics today, and many other scientists side with Hooker, as recently as Roff in 1990 (The evolution of flightlessness in insects. Ecological Monographs 60:389-421), found that flightlessness on islands is comparable to that of the mainland, and believed Darwin got it wrong. No one is right about everything, after all, Hawking and Einstein also got things wrong.

A large, new dataset on insects from sub-Antarctic and Arctic islands lying in the 'roaring forties' and 'furious fifties halfway between Antarctica and continents like Australia, show he was not wrong at all. 'They're some of the windiest places on Earth and now, while most previously flying insects elsewhere can still fly, species there have lost that extraordinary ability.

Instead, flies walk and moths crawl. 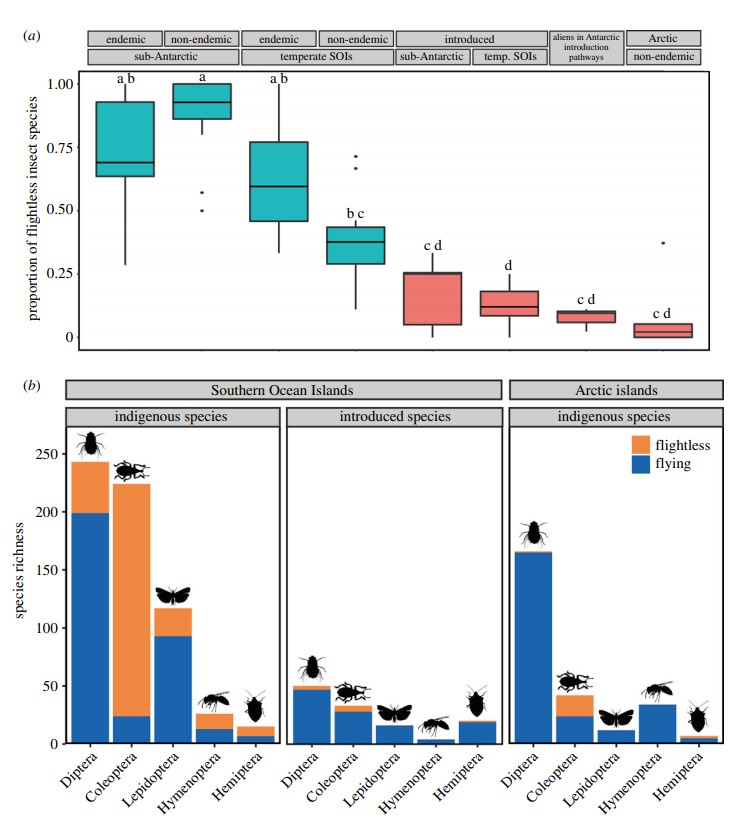 None of the usual alternative ideas, such as those proposed by Hooke, explain the extent of flight loss in sub-Antarctic insects, but Darwin's idea does in a slightly varied form, in keeping with modern ideas on how flight loss actually evolves. Windy conditions make insect flight more difficult and energetically costly. Thus, insects stop investing in flight and its expensive underlying machinery (wings, wing muscles) and redirect the resources to reproduction.

"It's remarkable that after 160 years, Darwin's ideas continue to bring insight to ecology," said Ph.D. candidate Rachel Leihy of Monash University, the lead author of the paper.