Popular imagery is that dinosaurs were a bland color, but most birds are have bland color palates as well. Then you have parrots or peacocks. In between the extremes of bland and flamboyant, there are pink pigeon feet, red rooster combs and yellow pelican pouches.

That may have been the case for dinosaurs as well. There’s a good chance that extinct dinosaurs rocked pops of color on similar body parts and may have flashed their colors to entice mates, just as birds do today, according to a study in the journal Evolution led by researchers at The University of Texas at Austin.

“Living birds use an array of pigments and can be very colorful on their beaks, legs, and around their eyes,” said Sarah Davis, a doctoral candidate at the UT Jackson School of Geosciences who led the study. “We could expect that extinct dinosaurs expressed the same colors.”

The takeaway on potential dinosaur color schemes comes from broader findings about skin and tissue color in the common ancestor of living birds and extinct dinosaurs, an ancient archosaur that lived near the beginning of the Triassic period. By analyzing whether bright body color was present in living dinosaur relatives – including turtles, crocodiles and over 4,000 bird species – the researchers determined that the common ancestor had a 50% chance of having bright colors in the soft tissues of its body. 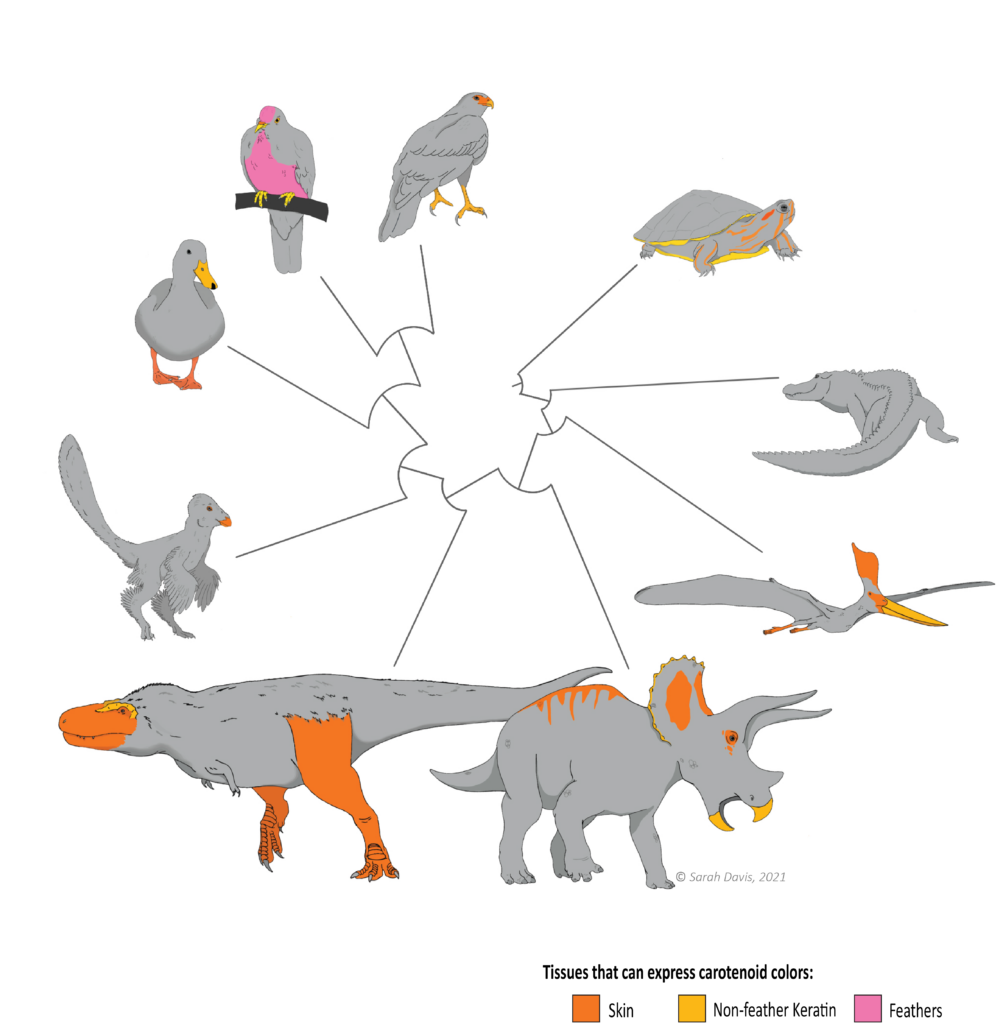 A simplified evolutionary tree showing where bright colors appear on birds and other living species from this studyand where these colors may have appeared on their extinct relatives, including dinosaurs. Skin (shown in orange), and scalesand beak keratin (yellow) could have been brightly pigmented in extinct groups, whereasfeathers and claws would probablynot have been. Areas without bright color are shown in gray. Credit: Sarah Davis/ The University of Texas at Austin

The bright colors examined in the study typically come from carotenoids – a class of colorful red, orange and yellow pigments that birds extract from their food. Carotenoids do not fossilize as well as brown and black pigments, which means scientists must study color in living animals to look for clues about color expression in their extinct ancestors.

The researchers used the data collected from birds and other animals to make phylogenic reconstructions, a scientific method used to investigate the evolutionary histories of species. The 50% estimate for bright color applies equally to skin, beaks and scales of the ancient archosaur. In contrast, the research found that there was a 0% chance that claws and feathers were brightly colored, which is consistent with other research, Davis said.

The study also examined the connection between color and a diet high in carotenoids, with Davis finding that birds with higher carotenoid diets (plant- and invertebrate-rich) were more likely to be colorful than meat eaters. What’s more, she found that plant-eating birds expressed bright colors in more places on their bodies than meat eaters or omnivores.

“The earliest dinosaurs were pony-sized and ate large, vertebrate prey,” said study co-author Julia Clarke, a professor at the Jackson School. “Different groups shifted to plant-dominated or mixed diets. This shift likely led to changes in coloration of skin and non-feather tissues.”

In addition to coloring the past, the research puts living birds in a new perspective. Davis said that the bird groups examined in the study have a reputation for being drab – especially in comparison to   songbirds, which were excluded from the study because they are the most distantly related to their nonavian dinosaur ancestors.

But aside from their feathers, the birds turned out to be quite colorful. The study found that about 54% of the 4,022 bird species studied had bright colors. Of this group, 86% of species expressed bright color in only non-feathered tissues.

“There is so much more to birds’ color than their plumage – just think of the vibrant orange-yellow bill of a toco toucan – but feathers tend to get the most attention,” she said. “This study unravels the evolutionary history of carotenoid-based coloration not just in plumage but also in the beaks and skin of birds and their relatives.”

The study was funded by the National Science Foundation and the Jackson School.