European Air Is Clean, But Diesel Black Carbon Could Be An Issue For Respiratory Issue Sufferers On These Streets
By News Staff | April 1st 2019 11:37 AM | Print | E-mail

News Staff
Air in England, the United States and most of Europe is now cleaner than it's been in over a century, but you wouldn't know that if you read populist epidemiology claims, which have redefined pollution from PM10, dangerous soot like black carbon, to PM2.5, which you can only detect with an electron microscope, and even down to PM1.0, which might as well be virtual pollution.

The modern hyping of air pollution in a very clean environment doesn't mean you are always safe if you have respiratory issues though, and a new paper notes which areas are the worst for real pollution, black carbon from diesel engines, if you are outdoors, as a cyclist would be. In two European cities where cyclists are common those are: London (traveling to Liverpool Street) and Rotterdam (traveling to Rotterdam Station).  In the Greater London area, 730,000 cycling trips are now made every day, a number that has grown by 154 per cent since 2000, but 35 percent of all trips are made by car. Since gasoline fuel prices are so high in Europe, primarily due to higher taxes and a political effort by diesel groups, which use a heavier, less refined fuel, to have weaker emissions standards, diesel is big there even for little engines. (1)

More diesel means more black carbon, real pollution, and that is a worry if you are sensitive to respiratory issues. 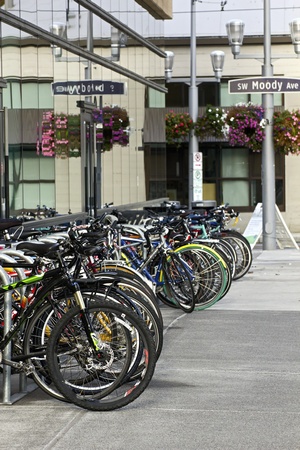 Professor Prashant Kumar, Director of the Global Centre for Clean Air Research (GCARE) at the University of Surrey, said, “While it is common sense to conclude that cyclists are at risk of potentially harmful exposure levels of black carbon, our study provides further evidence that cyclists should plan alternative routes during specific times. A slower, cleaner route home could make a dramatic impact on your exposure to harmful black carbon.

(1) They got that by mandating taxes based on engine displacement. A 1.5 liter turbodiesel engine costs far less in taxes than a larger gasoline engine but can give you similar torque. That is why you see so many scooters in Europe that are basically emissions-belching lawnmower engines attached to scooters. They last longer, which is a positive. They haven't taken off in the US because America puts a one-size-fits-all fuel standard for all engine types, and diesel has a harder time when it comes to miles per gallon comparisons.
News Articles
More Articles All Articles
About