News Staff
Though there is concern about inequality in outcomes when it comes to medicine, how much is due to lifestyle choices and the co-morbidities they bring and if any is prejudice by care providers is unclear.

Yet data can inform smaller populations. And an analysis of women with the SARS-CoV-2 infection who gave birth at two hospitals in northern Manhattan during the height of New York City's COVID-19 pandemic, the national epicenter, did not find a difference in impact on obstetric complications and symptoms of COVID-19 in different groups of women, regardless of income, race or ethnicity.

This information is important when demographers have been claiming that ethnic minorities, including Blacks and Hispanics, have disproportionately higher infection rates and worse outcomes compared with other groups. These are obstetric outcomes for pregnant women so can't inform all populations but it does show that health care professionals are not engaged in discrimination against vulnerable people even under maximum stress. 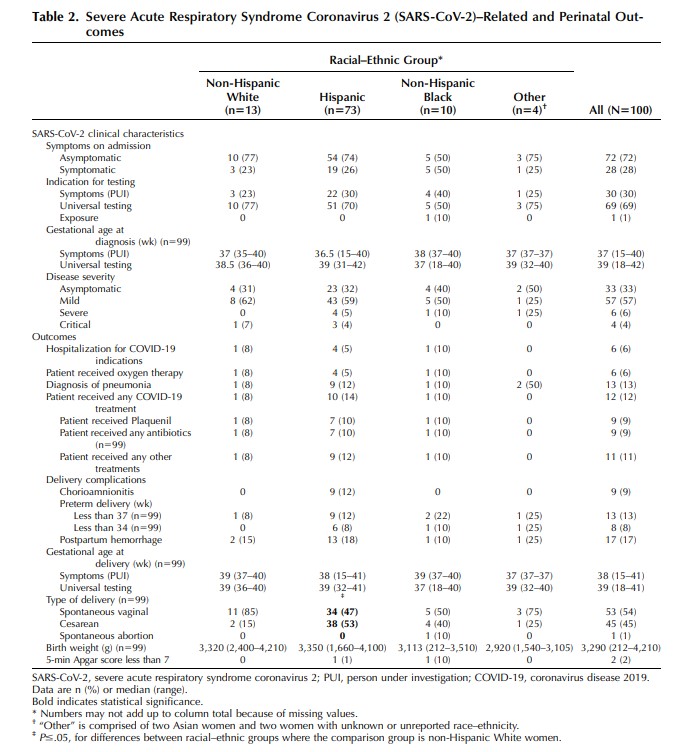 What the researchers found

Between March 13 and April 23, 2020, 673 women gave birth at New York-Presbyterian Morgan Stanley Children's Hospital and  New York-Presbyterian Allen Hospital. Among the first 100 women who tested positive for SARS-CoV-2, 73 identified themselves as Hispanic, 10 as non-Hispanic Black, 13 as non-Hispanic white, and 4 as other. Among these patients, Hispanic women were more likely to have SARS-CoV-2: 18% tested positive compared to nearly 13% of Black women and 9% of white women.

All of the groups had fairly similar rates of conditions like gestational diabetes and preeclampsia and complications including bacterial infections, preterm delivery, and postpartum bleeding. There were no differences in neonatal outcomes.

The authors of the paper believe there were similar birth outcomes across all ethnic groups, including those from economically disadvantaged neighborhoods because of universal SARS-CoV-2 testing among women admitted for delivery and more frequent follow-up care for women and newborns with COVID-19.
News Articles
More Articles All Articles
About