News Staff
Science is often easy in hindsight and two years from now we will likely know the evolution of SARS-CoV-2 from bats to humans. For now, it is mostly speculation.

An intermediate animal host may have been snakes or pangolins, but the real common ancestor of SARS-CoV-2 goes back for as long as coronavirus was recognized as distinct from the common cold - the 1960s.

A recent analysis links SARS-CoV-2, the official name for the 2019 coronavirus that can cause the COVID-19 disease, to dog intestines. There is no secret that Wuhan's wet markets - disgusting confluences of feces, urine, and blood where live animals, dead animals, and produce are all in close contact with little hygiene - caused its early spread in the city. But the ancestor of SARS-CoV-2 and its nearest relative, the recent bat coronavirus, infected the intestine of canids.

Humans and mammals have a key antiviral sentinel protein, called ZAP, which can stop a virus by preventing multiplication and degrading its genome. The viral target is a pair of chemical letters, called CpG dinucleotides, within its RNA genome. CpG dinucleotides act as a signpost that a person's immune system uses to seek and destroy a virus. ZAP patrols human lungs, and is made in large amounts in the bone marrow and lymph nodes, where the immune system first primes its attack.

But viruses evolve. Single-stranded coronaviruses, like SARS-CoV, can avoid ZAP by reducing these CpG signposts. A similar examination of HIV, another RNA virus, shows that it also exploited this evolutionary trick to lose CpG in response to human antiviral defenses. One implication of this is that the remaining CpG dinucleotides on the viral genome are likely functionally important for the virus and could serve as target of modification to attenuate virulence in vaccine development. 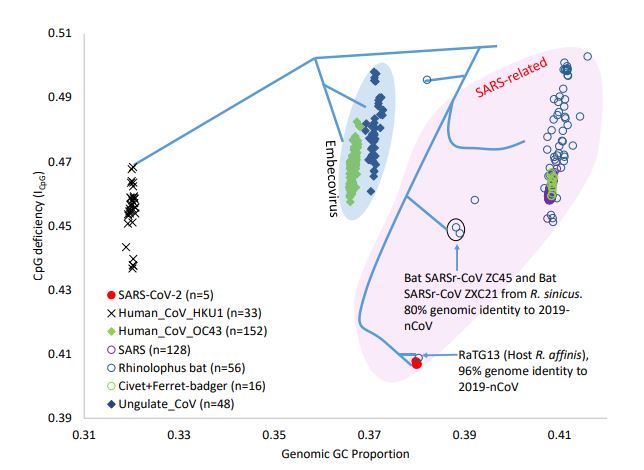