News Staff
Poplars have become popular for use in products like paper, pallets, plywood, furniture frames - even as a biofuel - because they grow quickly.

But being natural doesn't mean being good for the environment. Poplars are a natural source of isoprene, which negatively affects regional air quality and can lead to higher levels of atmospheric aerosol production, more ozone in the air and longer methane life. Ozone and methane are n the category of greenhouse gases, and ozone is also listed as a respiratory irritant.

It's not just poplar that produces isoprene in their leaves. So do oak trees and the eucalyptus plants popular in "essential oils." Though the initial foray into modern genetic engineering was for insulin and 92 percent of cotton is now GMO, when most people think of GMOs they think of food and Non-GMO Project selling labels for over 60,000 products. The next phase will also bring genetically rescued organisms, like the chestnut tree wiped out due to natural blight, and a recent collaboration genetically modified poplars not to produce isoprene. A three-year trial at plantations in Oregon and Arizona showed success. Trees whose isoprene production was genetically suppressed did not suffer any ill effects in terms of photosynthesis and were able to make fuel and grow as well as trees that were producing isoprene. 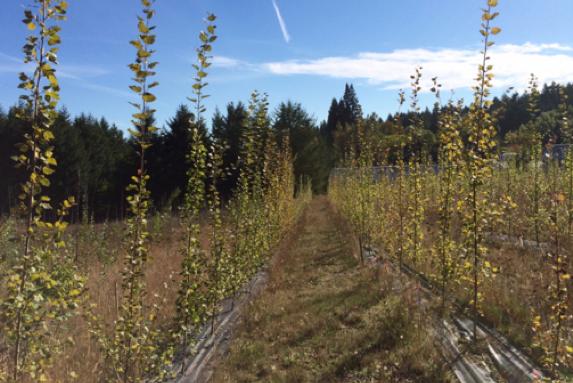 This wasn't really a GMO, which is a legal term for a patent on one technique, so different than mutagenesis, which is also genetic engineering but is certified by organic industry trade groups as allowed in their products. It was instead RNAi, RNA interference. Ribonucleic acid (RNA) transmits protein coding instructions from each cell's DNA, deoxyribonucleic acid, which holds the organism's genetic code, so RNAi is like a vaccination; it triggers a natural and highly specific mechanism whereby specific targets are suppressed, be they the RNA of viruses or endogenous genes. An even newer technique, CRISPR-Cas9 (clustered regularly interspaced short palindromic repeats), can do that at the DNA level, but activists consider all such biological science to be GMOs so that is the term used here.

"Our findings suggest that isoprene emissions can be diminished without affecting biomass production in temperate forest plantations," said Professor Steve Strauss in the Oregon State University College of Forestry. "That's what we wanted to examine - can you turn down isoprene production, and does it matter to biomass productivity and general plant health? It looks like it doesn't impair either significantly. In Arizona, where it's super hot, if isoprene mattered to productivity, it would show up in a striking way, but it did not. Plants are smart - they'll compensate and do something different if they need to."

There are challenges before this can be rolled out, namely that environmental groups opposed to science often claim they are instead anti-corporation, but as shown with Golden Rice, which is basically a vitamin-enriched bowl of rice to naturally prevent blindness in kids in developing countries, they use the lack of corporate attorneys to block approval indefinitely. This RNAi poplar faces the same challenge; it is a tool created by academics to solve a pollution problem, but Greenpeace et al. will easily suppress it using their political clout. And the other challenge is that sustainable forest management systems and their certifying bodies are white collar environmentalists in the same vein as Natural Resources Defense Council, Center for Biological Diversity, and others.

"If something is GMO, it's guilty until proven safe in the minds of many and in our regulations today," notes Strauss. "These technologies are new tools that require scientific research to evaluate and refine them on a case-by-case basis. We have a huge need for expanded production of sustainable and renewable forest products and ecological services, and biotechnologies can help meet that need."
News Articles
More Articles All Articles
About