Goldilocks Planet: Being Just Right Is Why Earth Provided The Ingredients For Life
By News Staff | June 24th 2020 03:31 AM | Print | E-mail

News Staff
When it comes to evolutionary biology and life on other planets, there is talk of amino acids, the building blocks of our existence.

But for any of that to work we first needed magnetic fields and plate tectonics, and a new paper finds that Earth became a "Goldilocks planet" by getting to the right place at the right time. So if we want to find other forms of life, we need to look for exoplanets that developed earlier rather than later.

Exoplanets are planets orbiting stars in other solars around distant stars and with thousands now known, there is a lot of speculation about how to detect life. It will start with narrowing down the possibilities; position, temperature, and geochemistry. 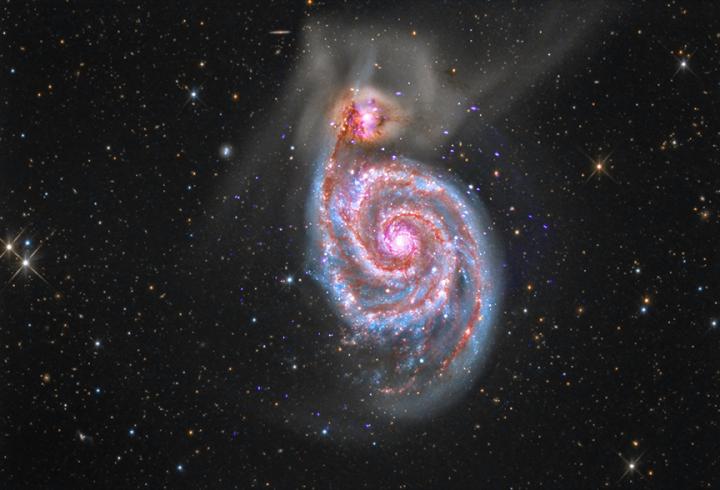 Galaxy M51, 30 million light years away, is in the process of merging with a smaller galaxy seen to its upper left. Image X-ray: NASA/CXC/SAO; Optical: Detlef Hartmann; Infrared: Courtesy NASA/JPL-Caltech.

Using huge simulations involving hundreds of processors on the Australian National Computing Infrastructure, the team ran the parameters through the ASPECT geodynamics code, which simulates the development of the interior of planets. The group was able to show that many early planets would have tended to develop plate tectonics, which is favorable to the development of life.

"Plate tectonics act as a kind of thermostat for the Earth creating the conditions which allow life to evolve," wrote Professor Craig O'Neil about their work at the Goldschmidt geochemistry conference. "The Earth has a lot of iron in its core, and we had assumed that this would be necessary for tectonic development. However we found that even planets with little iron may develop plate tectonics if the timing is right. This was completely unexpected.

"Planets which formed later may not have developed plate tectonics, which means that they don't have this built in thermostat. This doesn't just affect the surface temperature, this means that the core stays hot, which inhibits the development of a magnetic field. If there's no magnetic field, the planet is not shielded from solar radiation, and will tend to lose its atmosphere. So life becomes difficult to sustain. A planet needs to be lucky to have the right position and the right geochemistry at the right time if it's going to sustain life."

Researchers know that the overall chemical balance of the Galaxy has changed over time for diverse reasons, such as material coalescing into stars and planetary bodies, or being expelled through supernova. This means that the interstellar material available to form planets is significantly different to that available in the early galaxy.

The conditions favorable to life as we know it are becoming increasingly rarer in our galaxy.
News Articles
More Articles All Articles
About