Groundcherries Are Just The Start: CRISPR May Popularize A Food Future You Haven't Heard Of Yet
By News Staff | October 1st 2018 05:24 PM | Print | E-mail

News Staff
Few people have heard of the groundcherry because during legacy days of agriculture, when foods had to be optimized for various regions as easily as possible, it fared poorly compared to other farming crops due to undesirable characteristics, like falling on the ground and needing weeds.

Though people who sell the organic process think a limited monoculture past is worth paying a premium for, the future may belong to the groundcherry and other orphan crops, thanks to biotechnology and the gene editing tool CRISPR, the successor to legacy organic processes like Mutagenesis and transgenic options like Genetically Modified Organisms.

Our ancestors genetically modified fruits and vegetables to be bigger, but they went down the path of least resistance.  And that is why the groundcherry was left behind despite it being a powerhouse in terms of nutritional value. Packed with Vitamin C, Vitamin B, beta-carotene, phytosterols, and antioxidants, and other things that fad books call a "superfood." As its name implies, groundcherries drop to the ground, often before fully ripening, which puts the tropical-tasting fruit at risk for damage and creates a labor-intensive harvest process. In addition, fruit having to be gathered up from the ground causes concerns for food safety with potential for foodborne illness. 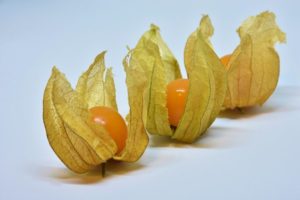 A jointless mutation in tomatoes may stop fruit drop in groundcherries and thus make it suitable for large scale agriculture, a team writes in Nature Plants.

Selections for mutations in tomatoes have led to improvements in yield and the authors hypothesized that groundcherry genes could be similarly modified for immediate improvements. One concern with the groundcherry is its weedy growth habit. Genetic alterations have led to changes in the hormone that regulates flowering, producing plants which are more compact with fruit in clusters.

They also targeted ways to increase fruit size and weight through a CRISPR-generated mutation, leading to fifty-percent more fruit along a given stem and more seedy sections in each fruit.