News Staff
It's a mystery why humans would go to a place even colder during an ice age, and live on giant rats. Yet they did. Most people don't associate Africa with mountain living today, but Ethiopians moved to the Bale Mountains during the Palaeolithic period 45,000 years ago.

At around 4,000 meters above sea level, the Bale Mountains in southern Ethiopia are inhospitable region. There is a low level of oxygen in the air (making activist protests against astronomy by claiming sacred heritage on Mauna Kea in Hawaii even more silly, since it's higher) temperatures fluctuate sharply, and it rains a lot.

Yet people will live in difficult places. It's been assumed that humans settled in the Afro-Alpine region only very lately and for short periods of time, but a new study says people had already begun living for long periods of time on the plateaus of the Bale Mountains about 45,000 years ago during the Middle Pleistocene Epoch.  It seems counter-intuitive to go into the mountains where it is colder and nature hates you even more, but by then the lower valleys were already too dry for survival. 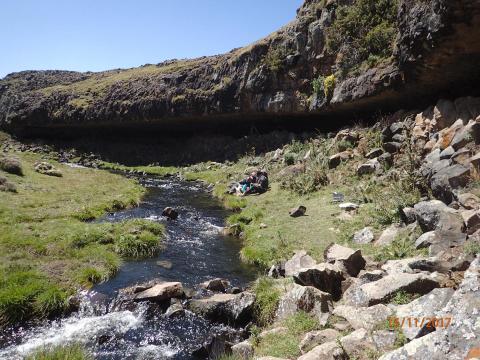 Evidence comes from a rocky outcrop near the settlement of Fincha Habera in the Bale Mountains in southern Ethiopia. During field campaigns, scientists found a number of stone artifacts, clay fragments and a glass bead. Sediment deposits in the soil underwent biomarker and nutrient analyses as well as radiocarbon dating to infer how many people lived in the region and when they lived there.

The scholars also developed a new type of palaeothermometer which could be used to roughly infer the weather in the region - including temperature, humidity and precipitation - because this was a remote area with little contamination so the soil profile didn't change a lot. The inhospitable conditions of the Bale Mountains present ideal conditions for such research since the soil has only changed on the surface during the last millennia.

Using this data, the researchers were not only able to show that people have been there for a longer period of time., but why.

During the last ice age the settlement of Fincha Habera, as inhospitable as it was, actually nicer than farther down. It was beyond the edge of the glaciers and since the glaciers melted in phases they had plentiful water. People ate giant mole rats. There was a deposit of volcanic obsidian rock nearby from which they could mine obsidian and make tools. The settlement  was habitable because it was practical, given the rest of what must have seemed like the entire world to them.

The soil samples also reveal a further detail about the history of the settlement. Starting around 10,000 years before the Common Era, the location was populated by humans for a second time. At this time, the site was increasingly used as a hearth. And for the first time, the soil layer dating from this period also contains the excrement of grazing animals.
News Articles
More Articles All Articles
About