News Staff
For two-thirds of parents it can be hard to know the line between recognizing youth depression and making something special of teen moods, and perhaps enabling more problems.

But there is no question America is the most over-medicated in the world, and one the most anti-depressants, and therefore it is little surprising that 25 percent of parents say their child knows a teen with clinical depression while 1 in 10 believe a peer of their child has committed suicide. Obviously that can’t be true, even if the age is pushed out to 24 there are only 6,000 suicides per year, while there are 60,000,000 kids in school from ages 6-22.

However, parents don't know that, and are going to be concerned about it, and want real answers about the difference between common teen moodiness and actual depression.

Most parents feel confident they know the difference but two-thirds say there are barriers to seeing the difference; 30 percent say their child is good at hiding feelings, which makes it more difficult. 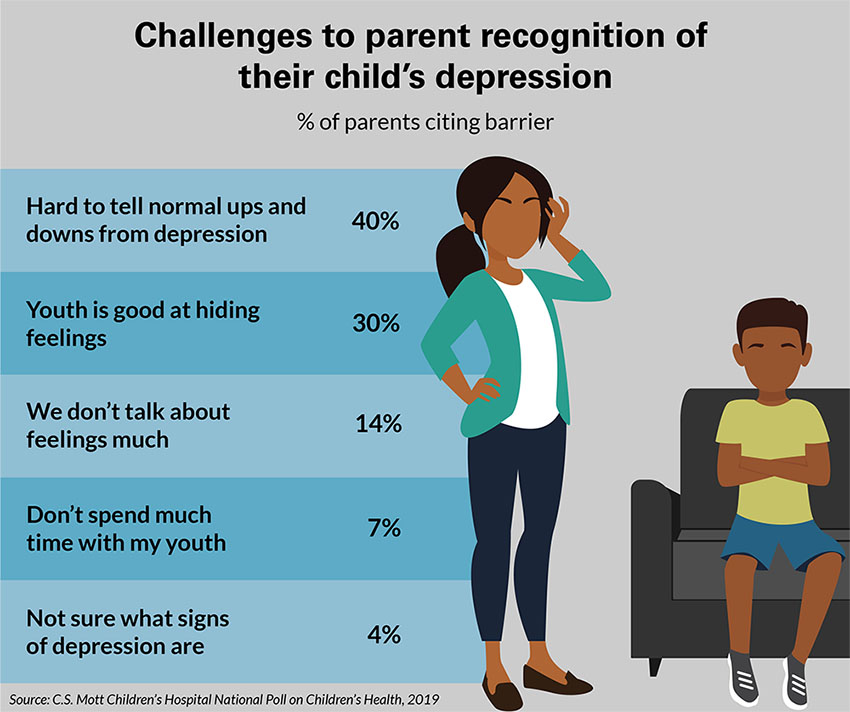 The poll suggests that the topic of depression is all too familiar for middle and high school students. Rates of suicide among the young hit a recent high in 2017, that is the 6,000 number above, but taking a low like 2007 and comparing it to a high like 2017 creates a 56 percent difference, and over-concern about turning statistical blips into curves may be doing more harm than good. Unfortunately the Centers for Disease Control and Prevention has spent the last half decade trying to scare everyone about everything so their outsized impact in media accounts may be part of the problem. Young people may feel like suicide is closer to home than it is, when CDC throws around claims like a 56 percent rise "in 10 years."

Yet parents are still parents, and feel like they would be better able to recognize depression in their kids than the kids would see in themselves.  And they believe schools help. Schools have enough on their agendas trying to be educators but they spend 6-7 hours per day with students so most parents also believe schools should play a role in identifying potential depression, with 70 percent supporting depression screening starting in middle school. If taxes go up to pay for that service, however, it is likely the percentage will drop considerably.

The nationally representative Mott Poll report is based on responses from 819 parents with at least one child in middle school, junior high, or high school.
News Articles
More Articles All Articles
About