Social media is king. It can run pizza chain founders out of their companies, it can be used by anti-science activists to mobilize well-meaning science advocates against other science advocates, but what it can't do is change human nature. And human nature says people will visit those nearby.

Even when people have well-connected social networks state lines, they are still most frequently interacting with people who are geographically close. Except in Los Angeles. Apparently everyone is looking for a reason to leave Los Angeles.

The conclusion comes from an analysis of 51 million geo-tagged tweets - already a confounder - generated by more than 1.7 million Twitter users across the U.S. in a 16-month period. San Diego State University professor Ming-Hsiang Tsou and alumnae Su Yeon Han led the collaborative study, also adopt mapping techniques which allowed for visual analysis of the information.

Geography is not dead

It's an Amazon world, you can have goods from all over the country delivered in two days unless the U.S. Postal Service handles "the last mile", but when it comes to real world interaction, If they do not live very close, highly unlikely, proximity rules, according to an analysis of tweets collected via the Twitter Streaming API (application programming interface) between November 2015 and January 2016. Identifiable data, such as a person's user name, age, gender and occupation, were not included in the dataset.

The team focused on the online and real space interactions of users in four major cities: Chicago, Houston, Los Angeles and New York. Spatial interactions generally include trips, telephone calls and emails, and the team broadened the definition to include any type of connection between places, including people viewing social media messages of those living in other places and "following" others online.

Studying geo-tagged tweets was essential, as social media data became a proxy for human connection and mobility.  With the massive database of tweets prepared for analysis, the team considered three main issues: how people followed one another, the awareness they had of the cities of their followers and whether they traveled to cities where their followers were located. To compare interactions online versus those in real space, the team studied origins and travel destinations of Twitter users, producing detailed data maps to easily visualize findings. 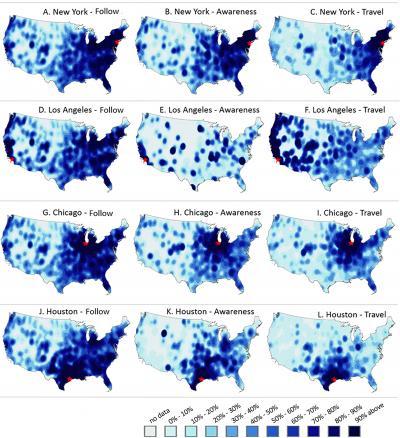 Of note, the team found that Twitter users averaged 90 percent of their tweets in a single city during the 16-month study period -- most often their home city.

In the real world, and despite some variation, the team also found that users in all states tended to follow others and have followers well beyond their immediate geographic region - often nationwide. However, according to the study, people are far less likely to have strong awareness of or even give mention to the cities of their faraway followers.

A sizable number of New York, Chicago and Houston users had online connections that were densely consolidated in regions just beyond their own cities, but seldom had real space interactions with people who lived beyond 5 or 6 hours away. For users in those cities, very immediate geographic proximity determined real space interactions with followers; making an hours-long drive to maintain a connection less likely.

Users in Los Angeles generally had an expanded network of friends nearby while being well-traveled regionally and nationally. However, they did not enjoy the same level of real life interactions with followers in their very immediate vicinity. The researchers attribute that partially to the entertainment industry, where individuals generally follow well-known celebrities and organizations that never follow them in return.