News Staff
Some people can experience a rash or sensitivity to some cosmetics while most people are fine. It isn't that modern cosmetics are bad, regardless what alternative companies and their trade groups like Campaign for Safe Cosmetics claim, it's nature. Botanical extracts sold as "natural" chemicals in cosmetics cause the same issue.

Poison ivy is a commonly known trigger for allergic contact dermatitis, an itchy skin rash, and everyone can agree that is natural. Some ingredients in nonprescription topical products, both conventional and labeled "organic" or "natural" can trigger a similar type of rash in some people, but just like with poison ivy. Activist groups use that to insist all cosmetics (except the ones sold by the companies funding them) are bad. The science is that an allergic reaction begins when the immune system's T cells recognize a chemical as foreign. T cells do not directly recognize small chemicals, and research suggests that these compounds need to undergo a chemical reaction with larger proteins in order to make themselves visible to T cells.

"However, many small compounds in skincare products that trigger allergic contact dermatitis lack the chemical groups needed for this reaction to occur," says study co-leader Annemieke de Jong, PhD, assistant professor of dermatology at Columbia University Vagelos College of Physicians and Surgeons.  "These small chemicals should be invisible to T cells, but they're not."

De Jong and colleagues suspected that CD1a, lipid antigen molecule in human skin that's abundant on Langerhans cells (immune cells in the skin's outer layer), might be responsible for making these chemicals visible to T cells.  In a new study, conducted with human cells in tissue culture, the researchers found that several common chemicals known to trigger allergic contact dermatitis were able to bind to CD1a molecules on the surface of Langerhans cells and activate T cells.

These chemicals included Balsam of Peru and farnesol, which are found in many personal care products, such as skin creams, toothpaste, and fragrances. Within Balsam of Peru, the researchers identified benzyl benzoate and benzyl cinnamate as the chemicals responsible for the reaction, and overall they identified more than a dozen small chemicals that activated T cells through CD1a. 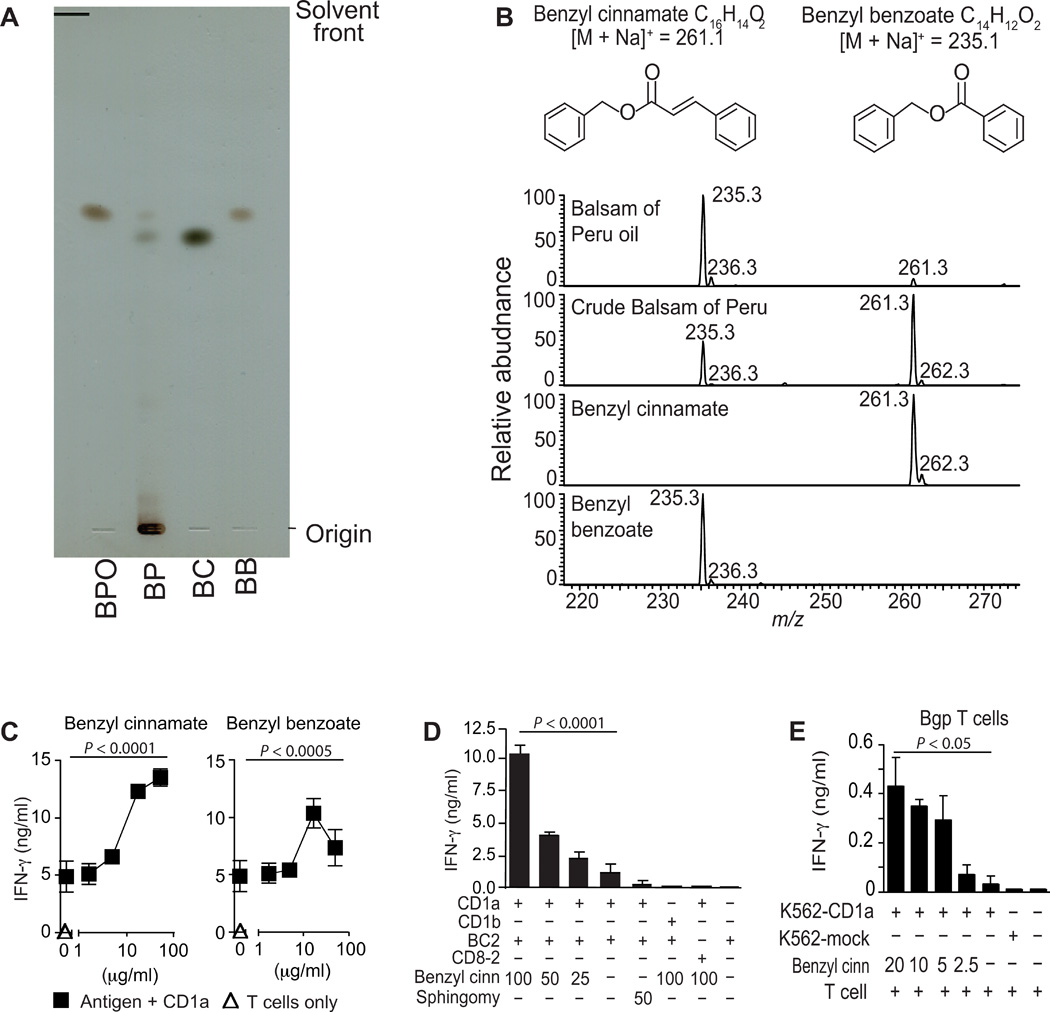 Chemical analysis of antigenic substances in balsam of Peru. (A) Normal-phase silica TLC plate resolves balsam of Peru oil (BPO), crude balsam of Peru (BP), synthetic benzyl cinnamate (BC), and synthetic benzyl benzoate (BB). (B) Structures of benzyl cinnamate and benzyl benzoate are shown with the expected mass of sodium adducts [M+Na]+, which were detected in positive-mode nanoelectrospray ionization MS. (C to E) T cell clones that are autoreactive to CD1a (BC2) or foreign antigen (CD8-2) were tested for response to antigens (μg/ml) or SM (sphingomy) by IFN-γ ELISA in cellular (E) or CD1a-coated plate (C and D) assays. Data are representative of three or more experiments, each shown as the mean of triplicate samples ± SD. The significance of lipid concentration on IFN-γ release was tested by one-way ANOVA (C). The significance of benzyl cinnamate and benzyl benzoate concentration on IFN-γ release and of the effects of CD1b or CD8-2 T cells were tested by two-way ANOVA (D and E).

"What we present here is a molecular missing link," said co-senior author D. Branch Moody, MD, a principal investigator and physician at Brigham and Women's Hospital. "We questioned the prevailing paradigm that T cell-mediated allergic reaction is only triggered when T cells respond to proteins or peptide antigens. We find a mechanism through which fragrance can initiate a T cell response through a protein called CD1a."
New Ideas for Treatment

CD1a molecules normally bind the skin's own naturally occurring lipids in its tunnel-like interior. These lipids protrude from the tunnel, creating a physical barrier that prevents CD1a from interacting with T cells.

Structural work done at Monash University showed that farnesol, one of the allergens identified in this study, can hide inside the tunnel of CD1a, displacing the natural lipids that normally protrude from the CD1a molecule. "This displacement makes the CD1a surface visible to the T cells, causing an immune reaction," de Jong says.

This discovery raises the possibility that allergic contact dermatitis could be stopped by applying competing lipids to the skin to displace those triggering the immune reaction. "From previous studies, we know the identity of several lipids that can bind to CD1a but won't activate T cells," she says.
News Articles
More Articles All Articles
About